Dear All,
Here is my entry for the current online modelling contest, which is a Nakajima Ki-87-I as kitted in 1/72 scale by RS models.
I have always had a fascination for this aircraft because of the exposed supercharger plumbing on the nose, so I jumped at buying the kit when I saw it at a local modelling show. It is not a bad little kit, being typical short-run and has benefited considerably by the addition of NH Detail's etched set. The photographs I have found of the first prototype show the wing armament and undercarriage covers not fitted, so I have left these off. Also, to my eye the turbocharger outlets do not seem to be correct, so rightly or wrongly I have modified these to a more egg-shape. The only other real issue I had was the cockpit canopy being a very bad fit, but that may just be my lack of modelling skills. Also, the hinomaru as supplied in the kit are perhaps a little bright (almost Dayglo!), but I used them anyway.
I didn't realise until building the kit how big an aircraft the Ki-87 was - it is almost the same size as a 1/48 scale Ki-51 "Sonia" that was on my modelling bench at the same time!!
- Derek Cooper - 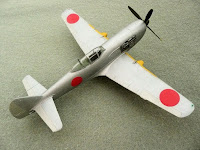 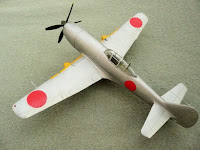 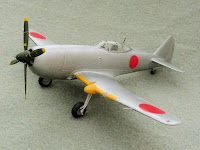 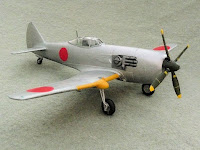 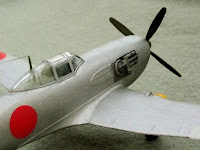 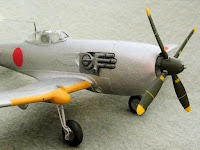 Nice effort Derek. It's an 8 from me.

Nice model! From what I can tell, the panel lines look real shallow. The only thing I can really say critically, is that it needs a bit more definition or contrast. However, I do know the nature of short run kits. 8.

I would like to see at least a minimum of weathering. I vote 7.