Harold K mentioned binoculars and just so happened a pair is/was on sale on the Japanese ebay.
According to the seller they were taken from the carrier Junyo when it was broken up. They are in pretty bad condition but, again according to seller, they work just fine. The lenses are 12cm. 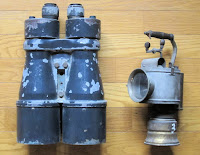 The marking indicates that they were manufactured by "Tokyo Shibaura Denki". The particular marking was used by the company from December 1943, so the binoculars were made some time after that date.
Also on sale is a signal lamp, also from Junyo, manufactured by "Ishomura Sangyo Co.Ltd.". 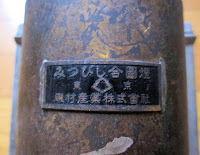 On a separate entry an IJNAF Model 2 turn-and-bank indicator is/was on-sale. It's an older type built by "Tokyo Koku Keiki". 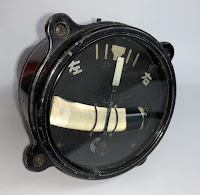 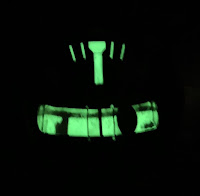 And ofcourse glows in the dark!
According to Mikesh in "JapaneseAircraft Equipment":
The instrument was "used also in visual flight conditions, it measured the rate of turn for the aircraft. To coordinate the turn so as not to slip or skid, rudder pedal pressure centered the black ball in the tube filled with fluid for dampening."
Posted by Arawasi

You would "step on the ball" to center it and that would be coordinated flight.