As before, two more photos from the 15th Naval Construction Battalion book. I left the original captions on.
First up is a very well known Mitsubishi "Betty". Wiki explains:
Japanese Surrender Delegation
On 19 August 1945, two B-25Js of the 345th Bombardment Group and 80th Fighter Squadron P-38 Lightnings escorted two Japanese Mitsubishi G4M "Betty" bombers. The Japanese aircraft carried a delegation from Tokyo en route to Manila to meet General MacArthur's staff to work out details of the surrender.
The Betty bombers were painted white with green crosses on the wings, fuselage and vertical tail surface and use the call signs Bataan I and Bataan II. After the delegation landed at Ie Shima, they boarded a C-54 Skymaster and were flown to Manila. After the meeting, they returned to Ie Shima. One of the two Bettys crashed on its way back to Japan out of fuel, due to an incorrect conversion of liters to gallons when the bombers were refueled. The crew were helped by a local fisherman, and returned to Tokyo by train. 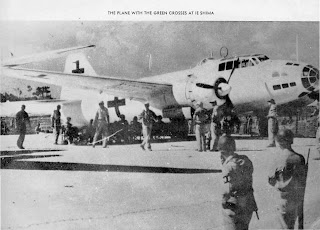 The second photo though, is often misidentified as showing the above mentioned Japanese delegation. They are actually members of the Japanese delegation that signed the surrender of Ryukyu Islands on September 7, 1945. But more about this on our forthcoming book, here... 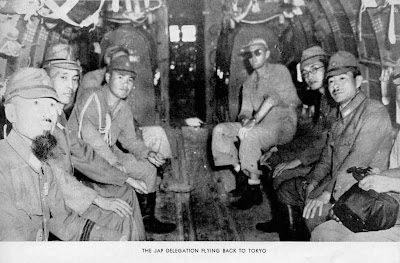 ...which gives me the chance for an update.

We started to put together all the material we had gathered over the years last summer and we were hopping to finish the publication in 6-8 months. We were planning to include only a summary of the history of each sentai and at that time the deadline seemed workable. Unfortunately for the deadline and fortunately for us and our readers, we came upon a treasure trove of material we never thought could be available or even existed; official unit histories. While checking on-line in the inter-library data base we discovered only one copy of the official history of the 60th Sentai in a library in...Germany! We were disappointed but kept working with what we had. During a visit to the Aviation Library in Tokyo and while checking in the civilian aviation section...VOILA! a copy of the 60 Sentai history book, not registered in their on-line catalogue.
This discovery opened new possibilities and within two months we were able to locate unit histories of most of the jubakutai (heavy bomber units) flying "Sally" and Br.20 bombers. We are now very close to finish the "In-Action" part of our new Eagle Eye which will include a VERY detailed account of ALL the sentai equipped with Ki-21s and Br.20s, with A LOT of original material, veteran accounts and more. Unfortunately the text of the whole chapter is at the moment running at 90 pages, more than the whole Eagle Eye #2 which means this one is gonna be a BIG one.
We're now working 24/7 to finish it by the end of the year. So, stay tuned!
Posted by Arawasi

Fantastic find!!! this means a GREAT Arawasi issue. Congratulations for your work, can't wait to see it

Very interesting George.
I look forward to the issue.