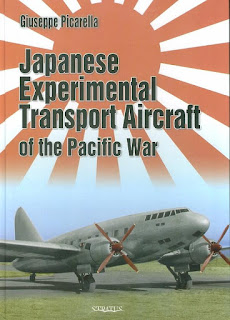 Title: "Japanese Experimental Transport Aircraft of the Pacific War"
Author & Illustrator: Giuseppe "Joe" Picarella
Published by: Mushroom Model Publications, ISBN 978-83-61421-41-2, h/b,
Contact: http://www.mmpbooks.biz/
Pages: 248, Size: A-4, Photos: 312 (17 in color), 62 drawing and illustration sets most in color.
Received last weekend a copy of this new publication and I like it!
I was originally taken aback by the title...I mean, how many "experimental" Japanese transports were out there and what kind of book would someone write about them, but once I started going through the pages I got to like the book a lot.
So, basically, forget the title. This book is the best effort so far on the much overlooked subject of J. Navy and Army transports in any language. The first two chapters offer excellent overviews of the organisation of the transport units of IJAAF and IJNAF with plenty of details on the Navy transport kokutai.
Chapter 3, 20 pages, is specifically about the operations of paratroops and special forces.
Chapter 4, 25 pages, is about the experimental transports of the Army. It covers types like Tachikawa Ki-77 & Ki-74, the best ever coverage and photographic material on the Tachikawa Ki-92 as well as the Mitsubishi Ki-97, Kokusai Ki-105 "Otori", Tachikawa Ki-110, Kokusai Ki-111, Tachikawa Ki-114 and Ki-120.
Chapter 5 deals with the navy experimental transports, specifically the Nippi L7P1, Kawanishi H11K1-L "Soku", Kawanishi K-60, K-120, K-200 and Showa L2D5. Finally a rather "what-if" Dewoitine/Mitsubishi D.350.
Chapter 6 & 7 deal with the IJAAF & IJNAF experimental gliders and their units with good photographic coverage and plenty of information.
Chapter 8 is a photo coverage of the transport planes that carried the surrender delegation while chapter 9 features a very interesting photo collection of captured transports at the end of the war.
Chapter 10 is entitled "Post-war Japanese Transport Operations" and examines how the Allies used a number of Japanese transports immediately after the end of the war and in chapter 11 how they evaluated them. The short but with excellent photos, 13 of them in color, chapter 12 is about the "Surviving Transport Aircraft of Imperial Japan".
The final chapter 13 is a photo album of Japanese transports with 42 photos of exceptional quality.
Appendixes 1 & 2 cover in short most if not all the J. Navy and Army transports of WWII. Appendix 3 includes a document entitled "Service manual for L2D2" while appendix 4 presents a list with the civilian registrations of transports while appendix 5 explains the Japanese Aircraft Designations and Allied Code Names.
Overall: Don't hesitate to buy this book due to the title. It's a highly recommended publication, of interest to J. aviation fans as well as modellers who will find in it a treasure trove of information and modelling ideas. Some of the photos can be found in past publications but in this book they are bigger and of better quality. There is a good number of brilliant new photos, especially the Ki-92 set, and "Joe" Picarella has made the book really beautiful with his detailed illustrations.
(Special thank yous to the author and publisher for the copy.
No thanks to Osprey who haven't sent me copies of the books I contributed material in.)
Posted by Arawasi

Thanks for this review; the book seems to be a "must have" judging from your description.

Yep. Best there is on the subject.