One of the most famous aviation artists in Japan is Kaiho Hideichi-san.
He was born in Tokyo on January 23, 1925 and joined IJAAF with the 13th class of the Shonen Hikohei (Youth Pilot) programme. He was a member of the famous 64th Sentai and participated in the defence of Japan in the final stages of the War; an experience that influenced him greatly.
Check these two links: Link One - Link Two for the very interesting story of Kaiho-san and B-29 pilot  Raymond "Hap" Halloran. 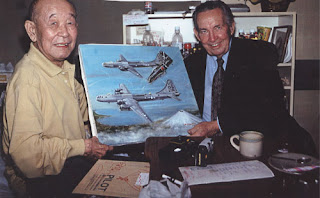 Kaiho-san on the left with Raymond "Hap" Halloran
After the War Kaiho-san became a Keirin (here) bicycle racer and later, after his retirement in 1962, a pilot instructor in Funabashi, Chiba Prefecture.
His history as an artist starts before the War. At that time he used watercolours and won first prize in a Navy art competition. After the War he changed to oils and he became a major influence to many young Japanese aviation illustrators and artists. He passed away in 2004. 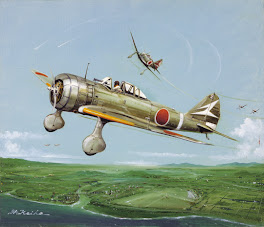 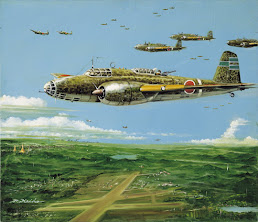 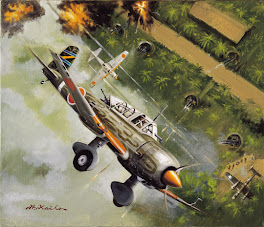 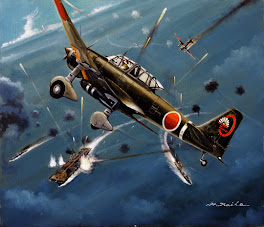 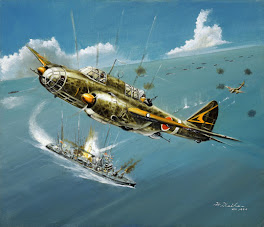 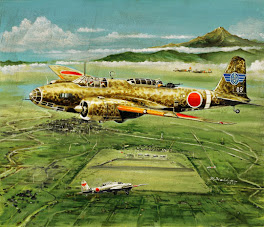 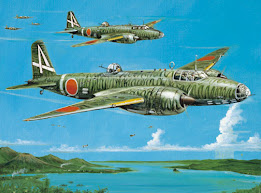 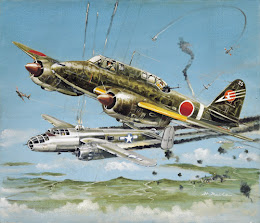 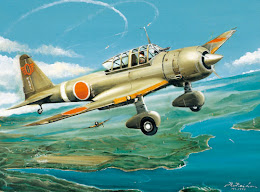 Small quiz: Can you identify the aircraft types and more importantly the units in the above paintings of Kaiho-san?
Posted by Arawasi

Nice stuff,hats off to the artist!
All of them are Army types and easily to identify - but I can't identify all of the units.

Excellent.
How about their units?
Jacob, which ones have you identified?

Beautiful paintings! Lots of action. I particularly like the top-down view of the Sonia attack.

Very talented. He seems to have a special interest in the Ki-51 and Ki-21. I wonder why; the Ki-51 in particular is a bit obscure compared to many other Japanese aircraft. Perhaps he had family members who served in those aircraft? It reminds me of a thread on some modeling forum I found once of a man who claimed his father was the Mitsubishi test pilot who took the Ki-51 up for its first flight, and so he had decided to do a carefully-researched model of a prototype Ki-51 in the same paint scheme as the first Ki-51 wore for its first flight. He had photographs of the test pilots standing with the Ki-51 in the background, and one of it in flight, taken from the rear seat of another plane. The pilots said it handled "like a fighter" and that it was a superb aircraft. I've always liked it, myself. It was touching to see someone put so much effort into what was basically a memorial to his father, his achievements, and his service to his country. It helps that the model really came out amazingly well, working hinges on the canopy, working landing lights and spinning prop, amazing detail everywhere.