Another loss this year. Former IJNAF Ace Kasai Tomokazu passed away last weekend at the age of 94. 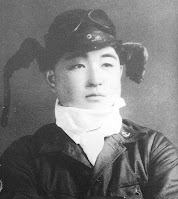 Here's what Hata & Izawa say:
Born in Hyogo Prefecture in 1926, Kasai joined the Tsuchiura Air Group in 1942 as a student of the Ko 10th Flight Reserve Enlisted Trainee Class. In November 1943 he finished the 32nd Flight Training Course, was promoted to PO2c, and ordered to Air Group 263. Halfway through his training, in March 1944 he was ordered to advance to the Marianas; however, en route he had to make an emergency landing on Pagan Island because of poor weather. Arriving late in Saipan, he joined CPO Sho-ichi Sugita as one of his wingmen. In May, he advanced to Kau base on Halmahera Island. With the landing of American forces in the Marianas, Kasai returned to Palau and participated in attacks on enemy vessels off Saipan, using Yap and Guam as advanced bases. Kasai lost his own aircraft, but escaped from Guam in a land attack plane and went to Palau, and then on to Davao.
With the disbanding of Air Group 263 on 10 July, Kasai was next transferred to Fighter Hikotai 306, Air Group 201. Under the leadership of Lt Kanno, the unit advanced to Yap. For one week starting on the 16th, the unit was engaged in intercepting incoming B-24s. PO1c Kasai's aircraft received hits and he had to ditch, but was rescued. Next, Kasai withdrew to Cebu and concentrated on training activities in ship-bombing tactics. After the American invasion of Leyte in October, Kasai served as wingman for Kanno and for Sugita; he participated in attacks and intercept operations and provided direct support to special attack force units. After that, in December, Kasai returned to the homeland and was transferred to Fighter Hikotai 301, Air Group 343. He was with the latter unit until the war ended. Number of aircraft personally shot down, ten. 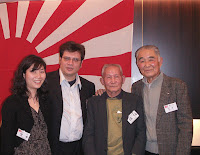 Arawasi had the privilege to meet Kasai-san a number of times. In the photo above he is standing on the right next to fellow Zero and seaplane pilot Saeki Masaaki.
Always full of life, a very cheerful and friendly gentleman who freely shared his memories. We plan to feature a special on Kasai-san in the next issue of our magazine.
Posted by Arawasi

So many are passing away now, makes it all the more important to hear their story. (No matter the nationality) We shall never see their like again....
What an honor to meet him!

Just saw an article on historynet about Kasai Tomokazu's passing and came to your website. He seemed a very engaging veteran and gave many interviews along with a memoir. Very sad to hear of his passing. I will look forward to your next issue about him.