A short clip today from the NHK Collection, dated May 1944, featuring Kawanishi H8K "Emily" and Kawanishi H6K "Mavis" flying boats.
According to the narrator:
"The sun has risen over our base in the South Seas. In the darkness of the dawn, the Navy's new flying boats reveal a giant body. An order is given. They escort our fleet to the southern front line in a hurry to replenish munitions. The commanding officer is explaining the meeting point with the fleet and various precautions for this escort mission. The enemy submarines that haunt our supply route should not be allowed any chance to attack the fleet. Escorting the fleet is a not a particularly The fleet escort, though lacking in splendor, has a very important mission, and the flying boat leaves the water dramatically.
At X hours X minutes, the fleet can be seen below. Immediately move in position to escort. Weapons and ammunition packed in the fleet are what our front-line soldiers have been waiting for..."
Although the video is of very low quality and the full tail markings are unfortunately not visible, these two stills... 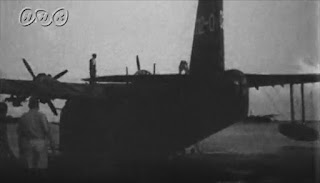 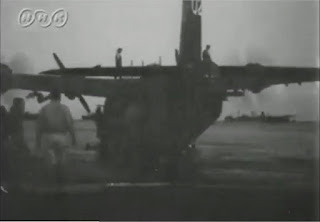 ...reveal that it's "??2-020". The only unit equipped with "Emily" flying boats with the number 2 at the end of its tail marking is the 802 Kokutai.
The unit was organized when it changed name from 14Ku on November 1, 1942, with flying boats and seaplane fighters. At that time the "Mavis" flying boats of the unit were at Jaluit, Marshal Islands. The Nakajima A6M2-N seplane fighters, at Bougainville and Shortland.
The flying boats also used Makin as their base from where they flew patrol and reconnaissance missions. They also bombed Espiritu Santo and Kanton Island in night missions.
From January 1943 the first "Emily" flying boats started to arrive and by the summer of the same year they were the main aircraft the unit was equipped with.
On October 15, 1943, the seplane fighter unit was assigned to the 902Ku and flying boats used Jaluit as their main base. On January 29, 1944, most of the unit relocated to Saipan where they continued patrol and reconnaissance missions as well as bombing Roi-Namur Island. The unit was disbanded on April 1, 1944, and the remnants were assigned to the 801Ku. But the 801Ku was also assigned to the Takuma Ku by the end of April.
From November 1942 until February 1943 used the letter "W-" as its tail marking. The unit used "Y4-" from March 1943 until the end of the year. After that it used "802-".
We can see the cockpit of an "Emily" in the still below. 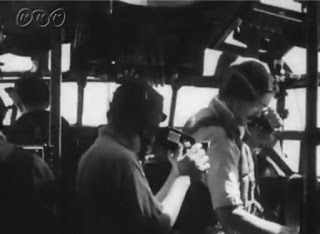 The crew member in the foreground is holding a Type2 bubble sextant.
Below is a photo of the instrument from here. 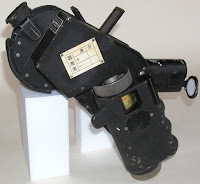 Another still shows a sign from the Awa Shrine. 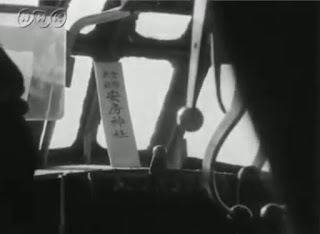 And also a very short part featuring the cockpit of a "Mavis". 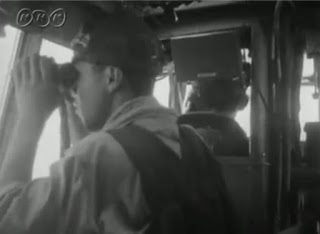 In the video we can also see the cruiser Yubari. 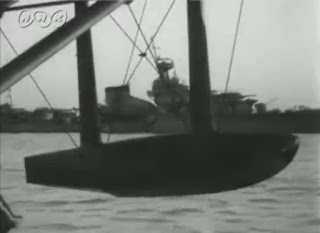 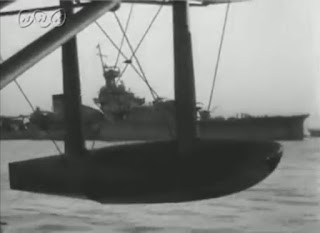 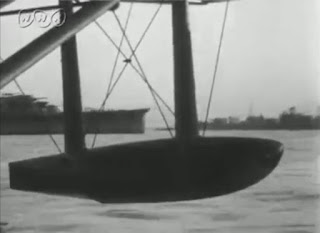 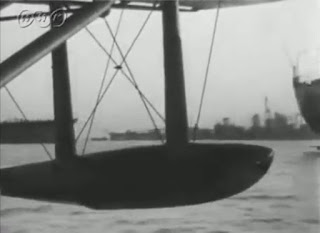 This would confirm the date and events above, and therefore the most possible location of the clip is Saipan and the date some day after March 30, 1944.
Posted by Arawasi