These two Hansa W.29 in 1/72 scale are basically the Eastern Express kits with Rising Decals conversion sets and decal sheets.
Said the E.E. kit is the only and dated game in town it obviously means a good deal of work to do - conversion apart- the model is a bit rough and needs a lot of refining to obtain a good looking replica. A lot of time has been spent in studying and studying again the few pictures available about this subject. And since the documentation is poor I had to interpret many details.
The interiors have been enriched with Part p/e set very hardly squeezed into the thick walls of the model. In the end due to the several modifications made to resemble the Japanese W.29 version - very little was left of the original photoetchings. As one can see in the pictures the rear seats accommodations had to be completely rebuild since pretty different from the German original- this was accomplished with tiny pieces of plasticard. I also replaced the original seats with ones from a Part p/e sheet dedicated to WWI seats. The nose section had to be cut off and replaced with the Rising Decals conversion parts - here I had some troubles in fitting the exhausts.
The radiators grilles have been modified from the RD originals - retained the radiator frame only and added a fine wire mesh while some cowlings details have been rebuilt since different in each subject.
All pipes, steps, cables, etc., have been reproduced with brass rods or tubes. The windscreens have been obtained from acetate...and now the nightmare: the floats struts and bracing! . I immediately realized fitting of these parts were something more than a trouble so I decided to assemble them in separate steps. The first problems arouse in cementing and trying to align floats and the "M" struts- despite all my efforts one of the floats (J-BAWI) turned out to be misaligned and noticed this only during the photo session! Well, this revealed to be the easiest task - the worst had to come yet! Once assembled wings and fuselage, finished the surfaces and fixed all the small details I went on to prime all the  parts and to paint the models in separate groups: fuselage/wings, floats and main struts, bracings. I used Mr. Color acrylic paints mixed to obtain the right colors. Once this work was done I had to apply the decals - luckly with no problems. Then I went on to attach the floats to the fuselage and again no problem. Then came the turn of the external bracings floats to outer wings' sections - the bracings, to my scorn, turned out to be too short so I had to rebuild them using brass tube. At first I built the "Z" structure in one piece only but, again, it was almost impossible to properly cement them to the locating holes due to the extremely reduced space. So once again I had to rebuild  (this time in single pieces,) prime and paint  the bracings and  this revealed itself to be the right solution at last! It has been hard modeling but the final results are satisfactory -to me at least
Models' finish: J-BAWI is a more or less a well known and documented subject, so no problem. On the other hand J-BAFI is an almost total guess so after much reasoning and guessing I decided to go for the finish you see - the grey/blue fuselage color was chosen bearing in mind the original German finish and the poor general conditions of the aircraft as revealed by the only known picture. So, my only responsibility!
- Danilo Renzulli - 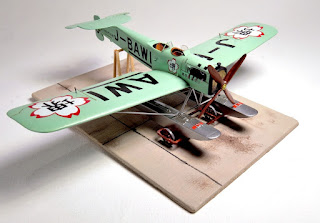 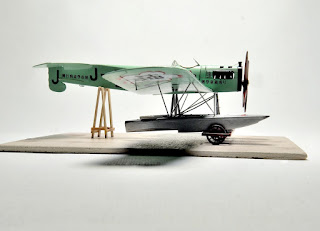 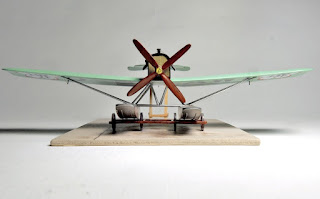 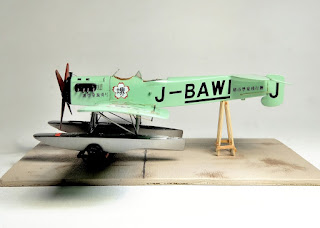 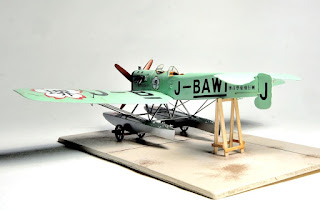 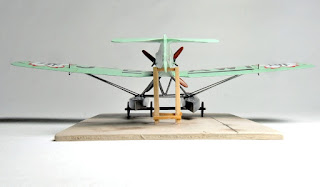 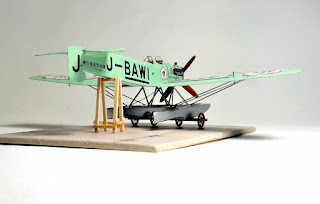 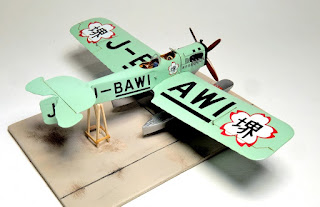 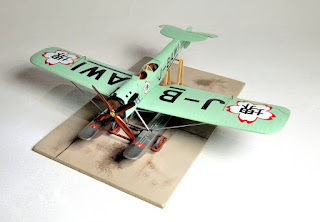 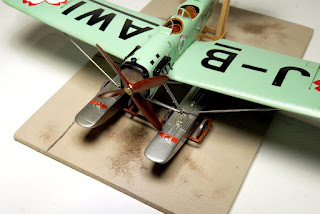 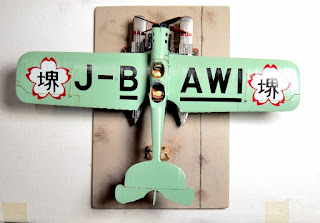 Fantastic work. Both your Hansas looking extremaly good. Can we se some interior works?