Our friend Peter Rathgeb sent over the following question:
I will build a 1/144 model (by A&W Models) of a Yokosuka H5Y (Type 99) Flying Boat. One of the aircraft was registered for the Central Meteorological Observatory, Yokohama (J-AAMG).
I would like to have a friend of mine make me decals for this aircraft, but I have found only one photograph, as per attachments. Do you think there are more photos to be found?
By the way, the Emily in the photo is the H8K1 13-Shi Prototype #3 converted to the Type 2 Transport Flying Boat 横鎮74 of Yokosuka Chinjufu Kokutai with the name of 敷島 Shikishima. 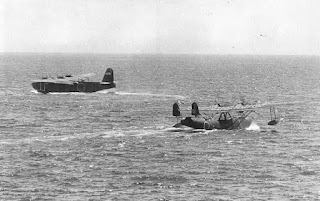 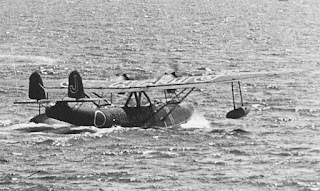 My answer is:
As far as I know this is the only photo that shows the aircraft in question. The name of the plane was "沖風" (Okikaze - offshore wind) so the two kanji would have been painted in white on the fuselage side next to the cockpit, similar to Emily's name.
Personally, I wouldn't dismiss painting the Okikaze overall dark blue (top and bottom surfaces) with black registration letters.
As early as 1937, when the Second Sino-Japanese War begun, and especially during the Pacific War, the vast majority of civilian aircraft that could be used by the IJAAF & IJNAF were taken over by the military and camouflaged. Most lost completely their civilian registrations and sometimes only very short inscriptions were applied on the tail to indicate the original civilian owner of the aircraft. And in general, civilian aircraft would not have been allowed to fly except in very rare occasions. Lack of fuel would be one reason.
The photo above was taken in the summer of 1944, quite late in the war, and a civilian seaplane to have survived with pristine civilian registration is extremely rare.
According to "J-BIRD", the Chuo Kishodai Yokohama (Central Meteorological Observatory, Yokohama) had the following aircraft in its fleet:
J-AAMA - Nakajima A1N, name unknown
J-AAMB - Nakajima A1N, name "Amakaze" (heavenly wind)
J-AAMC - Mitsubishi B1M, name "Umikaze" (sea wind)
J-AAMD - Nakajima A2N, name "Yamakaze" (mountain wind)
J-AAME - Mitsubishi B2M1, name "Shiokaze" (tidal wind)
J-AAMF - type unknown, name "Asakaze" (morning wind)
It is very possible the Chuo Kishodai had more aircraft in their fleet with registrations reaching J-AAMP and maybe more.
There are three known photos of Chuo Kishodai aircraft apart from the Okikaze...

...and all three of them are painted in blue.
Posted by Arawasi