Baronvonrob asked:
"All so very fascinating, but my question is, what actually is the probability of a Black or dark-colored Hayate as shown in Peter Scott's illustration? Years ago, Aeromaster produced a decal sheet depicting a "black" Ki84 of the 57th "Special Attack Company"…any thoughts or opinions would be greatly appreciated"
For a long time, artists have toyed with the idea of "black" Japanese aircraft, especially night fighters, I guess based on the assumption that the Japanese copied the Germans or the US night fighters or something along this line. Black was not an official camouflage colour in the IJAAF or the IJNAF pallet. It was largely not available to the units. All anti-glare panels were very thoroughly painted at the factories before the aircraft were delivered to the depots and the units. Black tail markings (letters, numbers, kanji and kana) were indeed applied to Japanese aircraft but mostly early in the war, before they received overall camouflage. When the aircraft were camouflaged in green, the black numbers would not stand out enough and therefore the crews, in most cases, preferred to apply the markings in white, yellow or red (with a surround) paint.
There are very few eye-witness accounts of black Japanese aircraft, but it is almost certain these were aircraft painted in very dark green paint; not black.
Furthermore, for an aircraft to be painted "black", the process at the unit level would entail the stripping of the original paint and then the application of the black paint. Without a primer, the black would chip, fade and basically disappear after a few missions.
Finally, in one of our very early posts, dated 2013, HERE, we featured a well-known colour photo, where all the IJNAF aircraft including the "Gekko" night fighters, were painted green; not black.
And last but not least, the colour photo below, from the Ethel Collection, features "Hayate" painted green; not black. 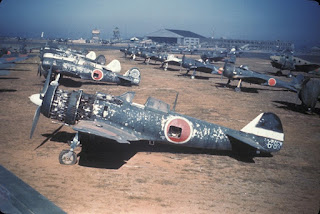 Note that a few parts on the tail of the "Hayate" in the foreground, look darker. It's dirt or oils or they are wet from the rain or something. You can see similar dark streaks on the fuselage side.
Issue #5556, published this year, of the beloved comic "Commando" features the story of the "Black Zero". 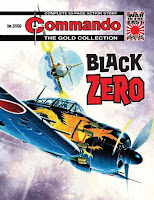 Although historical accuracy is not really expected, from the very first page we read of "the black Zero, personal aircraft of Captain Jirai Saito of the Japanese Army Air Force." 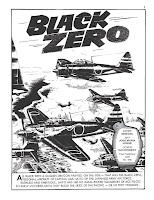 An IJAAF Zero?!?!?!?
The dragon on the fuselage is a lovely and very colourful addition but unfortunately, it's a flame-spewing European dragon, VERY different from Asian dragons. 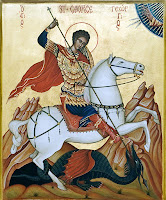 Dragons in Japan and Taiwan. 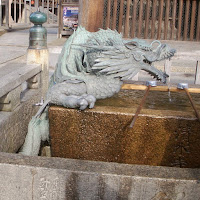 "Jirai" in Japanese means mine (as in minefield), a possible but not common first name for a Japanese.
Note that the aircraft are A6M5c and supposedly escort a raid against Darwin. A6M5cs started to be produced from September 1944, while raids against Australia were over by the end of 1943.
During one of these raids, a nicely depicted "Sally" is seen getting shot down. 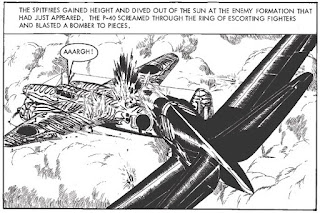 Unfortunately, "Sallys" never raided Darwin or Australia, as we explained in our recent Eagle Eye publication.
The second part of the story, describes an attack against a Japanese "General Moto" carrying the plans for the invasion of Australia. A fictional story, loosely based on the shooting down of Admiral Yamamoto. The bomber carrying the General is a "Betty" on one page, 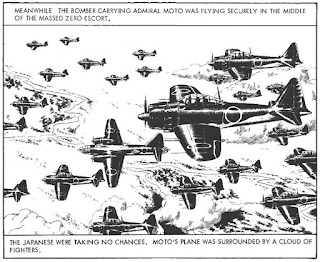 and a "Hiryu" on another.

As mentioned above, we don't expect the creators to be fanatical about historical accuracy and the Japanese aircraft featured in the story are much better than the yellow Zeros in older publications. But if the creators showed the same care and interest they show for the Allied or even German aircraft, things would look much better.
So, allow me to end this post by clearly stating that, in my opinion, there were no overall black Japanese Army or Navy aircraft. Dark green yes, black no. Could they have been? Unless some very clear and well-supported evidence is presented to prove beyond any doubt that a particular unit had some of its aircraft painted in black, then I'm afraid the overall black Japanese "Hayate" or Zero fall within the realm of the "purple Rufe"; i.e. fictional.
Posted by Arawasi

Thank you for your recent posts on the Hayate, George. I have been the build on FB and was curious about the tail markings (although I don't know too much about them to begin with, I am currently in Raiden mode).

>>what actually is the probability of a Black or dark-colored Hayate as shown in Peter Scott's illustration?

Its color is almost similar to "olive drab" of USAAF。It is one of the colors specified by the Japanese Army.

Well, that answers the question with certainty ..Thanks, George