Enzo, a modeller from the Philippines and Arawasi friend, sent over the following request:
"Would you happen to have photos of Hayates from the 1st Hiko-Sentai when they were in the Philippines? I am currently working on the new Arma Hobby one and I opted to do a Hayate from that unit. The one I am doing is based off of a profile from the Model Art Book."
My immediate quick answer was that there are no known photos of the unit's "Hayate" fighters, only two maybe three of 1st Sentai "Hayabusa" which we discussed HERE. Upon further research though, things became more complicated and here's what we managed to gather.
(For the earlier history on the unit, check our older post). The 1st Sentai started changing their "Hayabusa" to "Hayate" either in March or April 1944, while in Tokorozawa, Saitama Prefecture, or Kashiwa, Chiba Prefecture, and spent the next few months training with their new fighters. On August 30, the sentai relocated to Gannosu airfield, Fukuoka Prefecture, and were assigned to Kyushu air defence duties. While there, they were re-assigned to the Philippines and, to prepare, first relocated to Kashiwa, and then, on October 8, the unit reached Gannosu again with 23 aircraft in its strength. Two days later the unit reached Shanghai, and by October 21, all the unit's aircraft including those left behind due to mechanical issues, reached Pingtung (known to the Japanese as Heito) in Taiwan. At that time the unit had 32 aircraft. The next day the sentai relocated first to Malcat airfield, south of Clark airfield, in Luzon Island, and the following day reached Lipa airfield also in Luzon, and prepared for the "Sho Attack", the control of the air space over Leyte Island. At that time the unit had only ten aircraft in flyable condition and with the 11th, and the 22nd Sentai, comprised the 12th Hikodan. On October 24, the attack was launched with only 16 fighters from the 12th Hikodan, which were to escort 3rd Sentai "Lilys" and attack Leyte harbor. Each unit advanced independently, the fighters provided cover for the bombers in the sky over Leyte and landed at Manapla airfield in Negros Island. Meanwhile, ten more 1st Sentai aircraft reached Clark airfield from Taiwan and, altogether using Manapla airfield as their main base, launched repeated attacks against Leyte Island suffering extensive casualties. On October 24, early in the morning, the sentai commander Maj Matsumura Shunsuke, was shot down by U.S. fighters soon after taking off. He was temporarily replaced by Capt Kasugai Toshiro who was also shot down on October 25 during an air battle over Ormoc Bay.
In order to replenish its losses, the 12th Hikodan returned to Japan in November for a month. The 1st Sentai was based in Shimodate, Ibaraki Prefecture.
In December, the unit was ordered to return to the Philippines, but all the new pilots had only just graduated from flight schools and had no combat experience. On December 8, the 12th Hikodan having each sentai equipped with 40 aircraft, started to relocate to the Philippines. On December 17, the 1st Sentai reached Porac airfield from where it participated in air battles over San Jose and was tasked with the air defence of Clark airfield, suffering again grave losses. In January, the whole 12th Hikodan relocated to Taiwan with only 18 fighter aircraft remaining in its strength. In February 1945, the 1st Sentai was reassigned to the 6th Air Army, and moved first to Shimodate, then to Takahagi in Saitama Prefecture, where it was retrofitted and was assigned to air defence duties until the end of the war.
First, Hata & Izawa in their 1973 Japanese edition of their "IJAAF Fighter Units & Aces" and again in the English version of the book, featured the tail marking of the 1st Sentai "Hayate" fighters.

Akimoto Minoru in his old marking series in the Koku Fan magazine, August 1977 issue, presented the "Hayabusa" tail markings of the unit and only mentioned that the "Hayate" had similar markings. 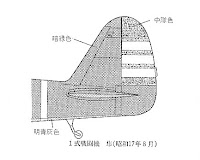 artist Nohara Shigeru created a side view showing the tail marking of the unit with the rudder in red, with two white bands and another white band in front of the rudder, conforming with the Hata-Izawa illustration.

Three years later, a FAOW on the type was released, #19,

and Nohara presented for the first time a full side view of a 1st Sentai "Hayate".

This time though, the red rudder had three white bands, no band in front of the rudder, and a red edge on the cowling front. The same art was repeated in Model Art #493, that came out in 1997.

and Nohara contributed artwork featuring a "Hayabusa" and a "Hayate" of the unit. 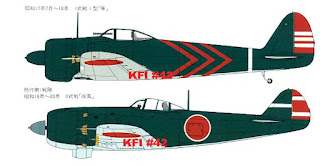 This time, the "Hayate" has the older two white bands on the red rudder and a white in front of it, but no red edge on the cowling. Of interest is the spacing of the white bands on the "Hayabusa" rudder.
Bear in mind that none of the above-mentioned publications included any photo of a 1st Sentai "Hayate" as proof of the unit tail-marking they were showing in these books. It is safe to assume that these illustrations were artistic interpretations based either on veteran testimonies or on conjectures without any hard evidence.
Unfortunately, the Hata-Izawa illustration only partially addresses the problem with the individual aircraft and hentai identification. Since the various tail colours indicate that various chutai, the white bands would indicate the individual aircraft and the band in front of the rudder could indicate the various hentai. So, a red rudder "Hayate" would belong to the 1st Chutai, the single white band in front of the rudder would indicate the first shotai, and the two white bands on the rudder indicated the second aircraft in the shotai. But considering that the unit had at some point 30 and later 40 aircraft in its strength split in three chutai, that would mean there were aircraft with three bands on the tail in front of the rudder and three on the rudder. And again considering that these aircraft were quickly shot down in the Philippines, the whole marking system would become meaningless when aircraft from various chutai and shotai were bundled together. I find it very unlikely that ground crews spent their time re-painting tail markings every time an aircraft was assigned to a different chutai.
But the biggest problem with the Nohara illustration in the FAOW#19 and MA#493, is that the tail marking looks very similar to the red and white tail marking U.S. aircraft used. The Japanese were ofcourse well aware of that marking as can be seen in one of the many photos of U.S. aircraft in war-time Japanese publications.

A fine summary George. Very interesting history and debate of the tail markings. Without photographic evidence (as is my approach) I would not consider a 1st Sentai Hayate, but the conjections leave room for the imaginative modeller. Maybe there is more available about 1st Sentai Hayabusas? I built on as a youngster in 1/32 based on a profile in Thorpe's Camouflage and Markings with a red rudder and two yellow stripes across the tail.

Interesting article, I have been following the build and was curious about how the markings were determined.