Non-Japanese publications seem to prefer a less complicated approach.
Don Thorpe depicted the 1st Sentai "Hayate" in his 1968 "IJAAF Camouflage and Markings" book without any white bands, only the rudder was painted in the chutai colours.

The 1971 Aircam and the later 1997 Schiffer publications on the type, claim to have spotted a 1st Sentai "Hayate", captured in the Philippines. 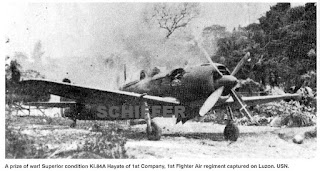 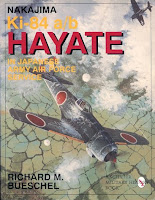 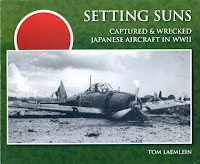 I'm pretty sure I've seen a very short video with US personnel trying to start this aircraft and setting it on fire in the process, but unfortunately I can't spot the video. Will update this post when I do.
Here's another photo of the aircraft. 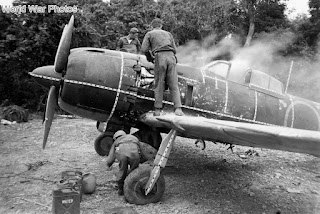 In any case, Okinawa means that the 1st Sentai proposition becomes unlikely. As we saw in the previous post, the unit was not involved in the Okinawa campaign. There is a slim possibility if one (?) "Hayate" of the unit had to make a forced landing in Okinawa during the unit's move from Taiwan to mainland Japan, but there is nothing to support this.
Peter Scott in his 1999 book, also agrees with Thorpe and presents the tail markings of the unit similarly. Note the "Hayabusa" tails too.

But Leszek Wieliczko, in his 2005 Kagero publication, agrees with Nohara.

In the meantime, AeroMaster released a decal set in 1/48, including Nohara's suggestion.

MYK Design has released a decal set based again on the Nohara illustration in 1/72.

And another with the Hata-Izawa design to cover all grounds.

Overall, I can't say I hate the Thorpe suggestion. It makes sense and with individual aircraft numbers at the bottom of the rudder or on the cowling side or even on the fuselage side behind the hinomaru, it would look even more realistic. No Japanese, author or researcher has ever adopted it, though.
The Hata-Izawa suggestion is also fairly valid based on the "Hayabusa" tail markings. But I think it starts looking weird once more bands are added to indicate the individual aircraft. What would be the difference between a 1st Chutai (red rudder), 3rd aircraft (three white bands), and a 2nd Chutai (white rudder), 3rd aircraft (three red bands) if all the bands are equally spaced? In other words, it would impossible to tell if it's red on white or white on red. That's the main reason I like the Nohara suggestion the least.
I have to admit that the lack of photographic material is frustrating and perplexing. Although the unit was decimated at least three times, they also spent time in Japan where the crews would have had plenty of time to take snaps with their newly arrived powerful fighters and send them back to family members for keepsakes, like so many other units did. Hata-Izawa in their Japanese version of their book, feature a group photo of 1st Sentai pilots (before you ask, no aircraft are visible). This means they probably located veterans and/or family members and obtained the said material. The fact that all these years no 1st Sentai "Hayate" photo has ever surfaced, clearly means that none was available to all these well-known and prestigious researchers and authors. I would expect that from transport or lesser units, but fighter were the most popular units featured in Japanese magazines and even one photo would have been a big hit.
There is one other possibility. The tail marking has been misidentified! Perhaps the 1st Sentai used a different tail marking than those that have appeared in illustrations. So, there are photos, of shorts, but the aircraft have been attributed to a different unit. Possible? Let's see tomorrow.
Posted by Arawasi