In order to protect the Japanese home islands from the expected B-29 raids from the newly captured island of Saipan, the IJNAF organized a number of air defence units. In the beginning, these fighter units were to be placed under the control of Naval bases, but in reality, it became difficult to organize them since the Naval bases had only seaplane units to protect them mainly from submarines. Therefore, the newly organized fighter units had to become independent.
On August 1, 1944, the Kure Naval Air Group Fighter Squadron became independent, was renamed 332 Kokutai and was stationed at Iwakuni Air Base, the closest land base to Kure. Initially, it was equipped with 45 Zeros, twelve "Gekko" night fighters and two "Raiden". Actually, only 28 of the Zeros, two "Gekkos" and none of the "Raiden" were combat-ready but gradually this was rectified and the unit came to be able to throw into combat no less than 27 Zeros, 15 "Raiden" and six "Gekkos". The Zero and "Raiden" groups were not separated as with the 352Ku but the pilots often flew both types.
The first combat mission of the unit was on October 25, 1944, when 16 Zeros took off to intercept 78 B-29s from the 20th Bomber Command targeting the Omura Aviation Arsenal, but the Zeros of the 332 were not able to make contact with the enemy.
At the beginning of December, 20 Zeros were ordered to the Philippines where they were based in Cebu Island and came under the 303 Fighter Squadron of the 201 Kokutai. They were wiped out in just one week after fierce battles. Only one pilot, PO Kurachi returned.
In November the unit received a number of "Suisei" night fighters, and the night fighter group was split into two.
The unit used throughout its history the tail marking "32-".
There are only a handful of Zero and "Raiden" photos.
The 332Ku "Raiden" featured in the Rising Decal set is "32-101" flown by CPO Ochi (family name) Akeshi (first name), April 1945.
According to the decal set: "CPO Akeshi Ochi belly landed with this aircraft after he shoot down one of three B-29 lost during air raid on 22 December 1944. Ochi achieved the unit's first aerial victory."
There is only one photo of the aircraft I know of. It is featured in Hata&Izawa's "Japanese Naval Aces..." 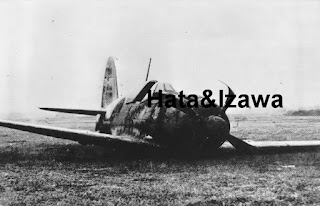 The very first depiction of the aircraft I could spot was by none other than Hasegawa Ichiro in the ancient FAOW (white) #7, July 1973. A very funky illustration indeed. Note the white surround on the fuselage hinomaru.

Around that time, illustrator Hashimoto Kikuo depicted the aircraft in a more prudent manner; fuselage hinomaru without any surround.

And finally, in the latest Model Art #831, Profile #11, 2011, illustrator Akutsu Osamu also followed the example of Hashimoto and Nohara and depicted the aircraft likewise. 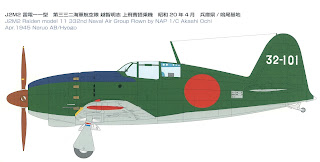 The fuselage hinomaru has the white surround overpainted and it seems that it was a common practice with that kokutai.
Let's see other "Raiden" of the unit.
A photo of "32-160" can be found in FAOW #61. Note the Zero on its starboard side and the "Gekko" night fighters in the background.

Note again the lack of white surround and a very close inspection reveals a barely visible darker line around the hinomaru.
I have not found any illustration of this particular aircraft.
Another "Raiden" is "32-163". Again, a photo can be found in FAOW #61. 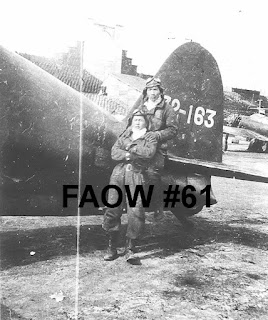 No white surround, a darker line is barely visible.
Nohara has depicted the aircraft with a fuselage hinomaru without any surround.

Another aircraft illustrated by Nohara and Akutsu in the Model Art publications is "32-168".

Note the white surround this time. I have not seen a photo of this particular aircraft and I cannot confirm the tail markings. Leave a comment if you know of a photo of the particular aircraft.
It is my conclusion that the "32-101" "Raiden" is accurately depicted by Rising Decals.
On December 16-17 a group of eleven "Raiden" and nine Zeros was dispatched to Naruo airfield, in Hyogo Prefecture, to participate in the defence of the Kansai area (Kobe-Osaka) while the "Gekko" group was redeployed to Itami airfield, Osaka.
The whole 332Ku relocated to Naruo in February 5, leaving only a training detachment back in Iwakuni. It was in Naruo that the war's end found the unit.
In Watanabe Yoji's "Air War over Japan", a photo of the mission board of the unit is included, taken a little after February 5, 1945. 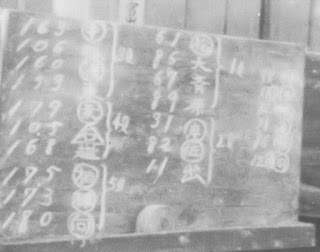 On the left side are the tail numbers of the "Raiden" that were to be flown that day, on the right side the tail numbers of Zeros. The first kanji of the names of the pilots with their rank is placed next to each number and from various Japanese sources, we were able to figure out that on that day:
"32-163" was flown by buntai commander Lt Nakajima Kohei
"32-106" by CPO Matsumoto Saichi
"32-160" by LTJG Watanabe Kiyomi
"32-199" by PO2c Azuma (Higashi?) Fukuo
"32-119" by ?
"32-105" by WO Ishihara Susumu
"32-168" by CPO Ochi Akeshi
"32-175" by LTJG Aizawa Zenzaburo
"32-173" by ?
and "32-180" by LTJG Mukai Jusaburo
We cannot know if these "Raiden" were the personal aircraft of the pilots or if they just happened to fly them on that day.
Update! The photo below of a 332Ku "Raiden" proves that it was common practice in the unit to overpaint the white surround of the fuselage hinomaru. 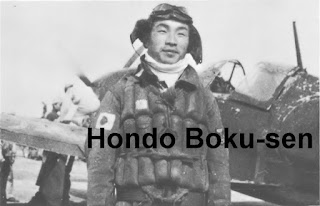 Update!
Our good friend Devlin Chouinard created excellent artwork of "32-101" and "32-160". Note that the latter was also flown by the "Tatsumaki Butai".

Since the hinomaru were factory-applied, and since there are a considerable number of photos with white surround resp. overpainted surround, I daresay it's safe to conclude that most (if not all ) Raiden were delivered with a white surround, at least those that came from the same factory. I don't know how many factories were involved in final assembly, though.
Great series of kokutai histories. Thanks George!

Excellent write up. DO you have photos of Naruo airfield, they seem to be difficult to find and I would like to confirm if a photo of a group of Raiden that I recently found was at Naruo. thanks