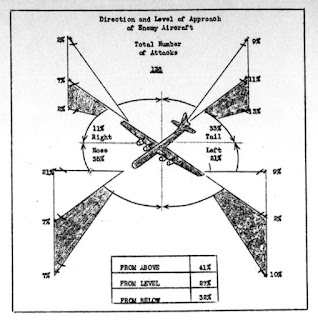 6. Miyazaki (Mission No. 120): No fighter opposition was encountered on this mission.
7. Miyakonojo (Mission No, 121):
a. The 2 formations involved passed over the target 2 minutes apart. A total of 35 attacks was sustained by both formations which were flying rather loose. This undoubtedly contributed to the concentration of attacks reported. The enemy is believed to have received early warning of the approach of the formations. Both formations observed 2 Bettys circling over the assembly point at 19,000 ft. Furthermore, E/A which had been following a departing B-29 observed the approach of our bombers.
b. The first formation over the target received a total of 26 attacks, 2 from the IP to the target and with the heaviest concentration just after bombs away, diminishing to 6 attacks after land's end. The second formation received a total of 9 attacks, 1 just before bombs away with the remainder sustained shortly after that time.
c. The majority of the attacks were pursuit curves with some fly-through attacks. The pursuit curves were poorly executed in that the fighters seemed unable to track smoothly and were continually pulling up the nose, thereby producing inaccurate fire and diminishing the number of bursts.
d. Other than air-to-air bombing attacks, only 1 coordinated attack was reported. Five Tonys flying line-abreast mod staggered slightly came in from 7 o'clock level, pressing to about 900 yards and then dropping back toward 6 o'clock.
e. The breakaways on the nose cone attacks consisted primarily of a sharp dive with a roll, whereas breakaways from the side and tail cone were generally tight diving turns and split-S's.
f. Several high overhead attacks originated out of the sun.
g. Some crew members reported enemy aircraft firing 12.7-mm and 20-mm projectiles.
h. Two B-29's from the lead formation were reported lost to enemy fighter action. One crew reported that one of these was struck above the radar compartment with a bomb believed to have been dropped by an enemy aircraft, although they were unable to see from where it came. When the explosion occurred, it apparently blew open the bomb bay doors and what appeared to be an oxygen bottle fell out. The B-29 crashed in the target area. Approximately 25 phosphorous bomb bursts were observed 500 feet to 1000 feet above the lead formation from the target area to land's end. A Tojo or Tony dove from 2000 feet above, released a bomb, and then zoomed out of the way with the burst falling short. One crew reported three Tojos coming in from 11 o'clock high, pulling up sharply, and releasing phosphorous bombs about 2000 feet above. They burst approximately 1000 feet over the formation at 15,000 feet over the target area. The bombs were reported as having whitish-yellow sttreamers.
8. Kokubu (Mission No. 122):
a. The first formation was intercepted immediately after bombs away and was attacked by from 40 to 50 single-engine enemy aircraft with phosphorous bombs, machine-gun, and cannon fire for about 15 minutes. Enemy aircraft approached from high, perhaps 5000 to 7000 feet above the formation, out of the sun. Phosphorous bombs were hurled into the formation as the E/A broke away turning up their bellies. The phosphorous bombs were launched from 200 to 500 yards out at from 9 to 3 o'clock, slightly high, level, and low. The aircraft often recovered and pressed in closer with machine-gun and cannon fire. The enemy planes were particularly vulnerable to B-29 fire, since they seemed to hesitate while launching their bombs. Fifteen phosphorous boob bursts were reported in all. Jacks appeared to be dropping bombs.
b. Four coordinated attacks were reported. A formation of 4 coordinated in phosphorous bombing as described. Three aircraft coordinated in an attack on the tail. Two made sidewheeler attacks from the right side. One E/A performed aerobatics at 3 o'clock while 3 others attacked. There appeared to be a definite effort to distract our gunners by attacking from many angles simultaneously.
c. Breakaways were wing-overs and split S's. A few returned to made pursuit curve attacks.
d. The second formation, 1 minute later, encountered less aggressive opposition in the same region. Eight to ten attacks by single-engine enemy aircraft using the same tactics, were experienced. Thirteen phosphorous bomb bursts were counted.
9. & 10 - see previous post.
11. Kushira (Mission No. 125): Four enemy fighters identified as Jacks or Zekes, were encountered in the target area. These aircraft did not press attacks. One enemy fighter attacked the second formation and pressed the attack to 500 yards.
---------------------
Below is a Google composite map showing approximately all the airfields and other place names mentioned in the report and the previous post. 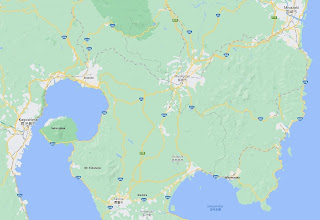 B-29 s/n24611, "Little Jo", was shot down over Miyakonojo and crashed in the sea near "Minaminaka".
B-29 s/n44-61623, "Sally Delle" was shot down over Miyakonojo but the crashing site is not mentioned.
Sakata claimed to have shot down two B-29s "northeast" of Kanoya, which as a general area falls near Miyakonojo. The other two "Raiden" pilots that could have been involved, were Sasazawa who made an emergency landing at Miyazaki airfield, and Ueno who also attacked B-29s in the Miyakonojo area.
These three probably attacked the B-29s of Mission 121.
B-29 s/n42-65295, crashed near Kimotsuki, which is to the east of Kanoya. So this bomber either belonged to the B-29s that attacked the Kanoya airfields (Missions 123 & 124) or Kushira (Mission 125). Kawai and Baba from the 302Ku as well as Nakajima, Saito and Watanabe from the 332Ku who operated over Kanoya might have been involved. None of them claimed any B-29s as shot down, though.
All the rest of the "Raiden" pilots attacked the B-29s that raided Kokubu airfield (Mission 122) and intercepted them either over Sakurajima (Kunimoto 332Ku and Wada 352Ku) or over Kagoshima (Sato 332Ku).
This leaves Kuroda who claimed to have shot down a B-29 which crashed against Mount Takakuma. This bomber too was probably part of the Kokubu Mission, but apart from the mysterious B-29 s/n44-69918, no other bomber looks to be a candidate for Kuroda's kill, area wise.
Lt Ito in a post-War article published in "Maru" magazine, explains that Kanoya was chosen as the "Tatsumaki Butai" base because it was easy for the Japanese fighters to attack the U.S. bombers, as they were flying level at about 5000m at a fairly low speed. During the B-29 raids against Tokyo, the bombers flew at about 9000m with the wind on their back, and at very high speeds, so it was very difficult for the interceptors to catch them. But during the raids against Kyushu, the bombers were coming from Saipan, and if they were flying at high altitudes, they wouldn't have enough fuel to return back to their base.
Furthermore, the bomber routes were always over Kanoya and the "Raiden" had a good chance to catch them. From the ground, the battle results could be confirmed and if the Japanese pilots needed to bail out, they would fall on friendly land.
The article includes an illustration showing the way the "Raiden" had practiced and attacked the B-29s. 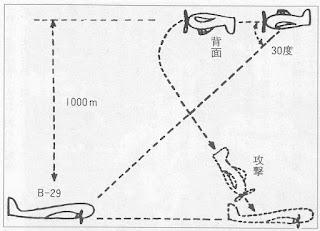 Finally, Ito remembers, about a week after they arrived in Kanoya, an incident when a "CPO" shot down a B-29. On that day, Ito had completed his attack against enemy planes, had landed in Kanoya and was able to observe another "Raiden" executing perfectly the above illustrated maneuver, hitting a B-29 from which white smoke came out, the tail was separated and crashed on a mountain side. About ten parachutes were seen deployed. It was the first and only time he saw a "Raiden" shooting a B-29 this way in one pass.
The above is a very credible eyewitness account of Kuroda's kill that confirms the story. A different veteran manning the radar station in Kanoya, remembers two US crew members brought to the headquarters of the unit before they were taken away as prisoners.
As we saw in the previous post, the only survivor of "Little Jo" B-29 that was taken prisoner by the Japanese, was captured at a completely different location.
In conclusion, I would have to say there is a story here from the US side that hasn't been told properly.
Posted by Arawasi