In January 1923 Asahi Shinbun sponsored the beginning of a once-a-week regular postal flight between Tokyo and Osaka by a group called Tozai Teiki Kokukai (East-West Regular Air Transport Association). To accomplish this, the newspaper received a fund from the Communications Ministry and purchased from the Army six Nakajima Type 5 Biplanes. They also received from Ito Hikoki the one Ito Emi 29 Taihoku-go Passenger Transport and the one Shirato 25 Kuma-go Racing Aeroplane which had a fatal accident a month later. The connection started with eight aircraft, three pilots from Ito Hikoki and four from Shirato Hikoki. Every Wednesday one aircraft took off from Tokyo, one from Osaka and met at Mikatagahara airfield in Hamamatsu, Shizuoka Prefecture, where they exchanged mail cargo and returned to their bases.
This was the first time a Japanese newspaper purchased aircraft and all eight of them became the first in the Asahi fleet of more than 124.
Asahi Shinbun planes came to carry the newspaper logo, still in use today, most often under the wings but also occasionally on the fuselage sides. It should be stressed that this is a newspaper logo, not a military marking and should not be used as such even on what-if models where the marking is placed freely because it looks cool. 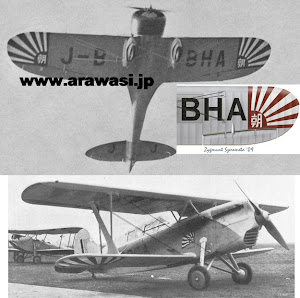 Top: Nakajima AN-1, J-BBHA, became the 112 aircraft in the newspaper fleet. Bottom: Kawasaki A-6, J-BBFA, became the 111 plane in the fleet. Very often Asahi newspaper aircraft carried hinomaru on the top surfaces of the wings.
Rival newspaper Mainichi Shinbun purchased their first aircraft, a SPAD Herbemont 20C2 two-seat fighter J-TONT and a Sopwith 3 Pup J-TALO, in 1924 but in July of the same year the SPAD was damaged in Yoyogi Military Ground of Tokyo. The newspaper fleet eventually came to consist of more than 103 aircraft.
In the beginning the newspaper logo was usually carried on the tail and under the wings with a hinomaru on top but gradually it was applied only on the tail with hinomaru on the top and bottom of the wings. 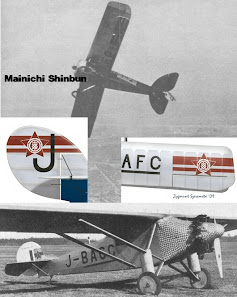 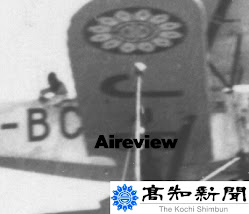 The only publication dedicated to the Japanese newspaper aircraft is Model Art #420, December 1993, written by Hoshiyama Kazuo, Kawakami Hiroyuki and others featuring illustrations by Onizuka Hitomi and Sekiguchi I. Unfortunately it's out-of-print but copies are occasionally available through our site. 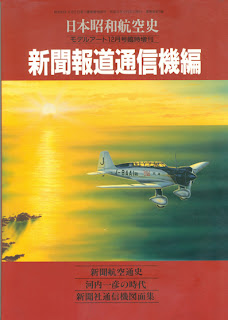