A Tachikawa Ki-54 trainer has been pulled out of Lake Towada where it had been resting for more than 69 years thanks to the efforts of the volunteers of Aomori-ken Koku Kyokai (Aviation Association of Aomori Prefecture).
The plane made an emergency landing on September 27, 1943 due to engine trouble on her way to Hachinohe airfield, Aomori prefecture, from Noshiro airfield, Akita prefecture. There were four passengers. One was saved by a fisherman but the other three were lost. Their bodies were not found in the wreck.
The plane was first discovered two years ago by a marine research company but the first effort for recovery was unsuccessful because half of one of the wings was buried in the mud. During the second successful recovery the plane was split in three, main wing, nose around the cockpit and rear fuselage but all in all the recovery team is confident it will be successfully restored.
The 38th Sentai was organised in April 1943 from the 1st Chutai of the 3rd Sentai. From March 1942 until June the 3rd Sentai was based in Hachinohe airfield and then relocated to Hokkaido.
A last set of photos, from HERE. The aircraft will be moved next week to Misawa Aviation and Science Museum pending restoration. We hope to visit it for a very close inspection and we will definitely keep you informed through our blog.

Notice the "blue" color of the flaps.

Source here. Note the interior green and possibly the dark brown primer in the windows.
Photos below, coutresy of Mr. Oota Hiroyuki, from HERE. 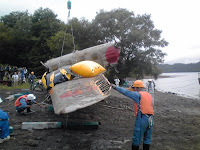 One of the two Hitachi Ha-13Ko engines. 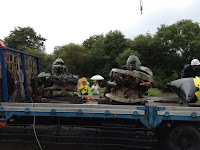 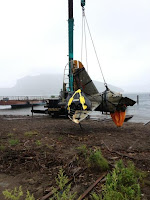 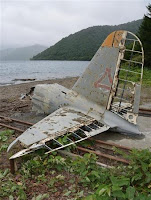 Fabulous!
I wonder how much of the damage to the airframe is from the ditching, and how much from the recovery process? Still, I'm sure that wonders can be done restoring it.
Amazing how the colors have stood up after so long; even in fresh water.

According to the news the plane is in very good condition considering it's been under water for so long. As you can see the fabric of the control surfaces is gone but it's really amazing that the tail marking and the Hinomaru have been preserved so well. The yellow top on the tail indicates that it belonged to the 2nd Chutai.

Look at those colors!

That is amazing! I wonder if this will answer some questions about paint colors, or just add more fuel to the fire?

Excellent news and photos. It's remarkable to see it's still got some or its colour!

So; the props appear to have been turning when the a/c was ditched.
Great photos, George; thanks and keep them coming.

Is this the 'famous' army light grey green?
The paint is in a remarkable good condition, and they always say the Japanese has crappy paints.

Am I the only one deeply saddened that the recovery team has hacked up such a beautifly preserved aircraft? I would much rather have seen it resting peacefully until the proper equipment could have been brought in to allow it to be recovered intact.

>Am I the only one deeply saddened that the recovery team has hacked up such a beautifly preserved aircraft?

First of all the recovery team need some congrats for the overall effort. The plane broke appart into 3 pieces during the process. Nobody "hacked up" anything. There have been 2 more similar recoveries in the past. The Nate in Tachiarai and the Shiden in Shikoku. The Nate was in bad pretty condition, the Shiden much better. There is no way to know how the whole plane will behave once you start pulling it out of the water. A wing may fall, the fuselage may break. It largely depends on the conditions of the original crash, and the state the plane was in underwater. In any case I will wait to see the restoration results before I pass judgment on the team.

Is this the 'famous' army light grey green?

Yes. We hope to visit the plane soon to take more photos of the surviving paint/colors.

The paint is in a remarkable good condition, and they always say the Japanese has crappy paints.

Good observation. It is very possible the plane had a hand of red-brown primer that protected the paint.

My first reaction was "on no!" when I saw this post. I just hope it is in good hands. By far the best-preserved IJA paint I've ever seen!

PS. "Notice the "blue" color of the flaps." - that's the aileron, and it's in standard dark blue-grey primer as expected.
What's more interesting is the bright colour of the actual flaps. I'd have expected blue-grey there too (like on Ki-27).