A photo of a Japanese X-plane today, the Hiro Kosho H3H1. Only one was completed on January 26, 1931 with a maiden flight taking place the next day. From May 11 of the same year it was given to Yokosuka-Ku for evaluation where problems with the elevator, the directional stability and engine cooling resulted in constant modifications. Unfortunately the problems were not rectified and the type was not officially adopted by the Navy but instead the Kawanishi H3K1 was preferred. It was the first all-metal large size aircraft built by Japan and the first Navy aircraft to feature a tail gun position and could carry a bombload of one ton. It was used as a testbed for the Mitsubishi Shinten 950hp engine and the only aicraft we could locate with this engine was the Yokosuka (Kokusho) H5Y1 flying boat. In 1934 the flying boat staff of Hiro transferred to Yokosuka (Kokusho) and it was them who were responsible for the H5Y1. 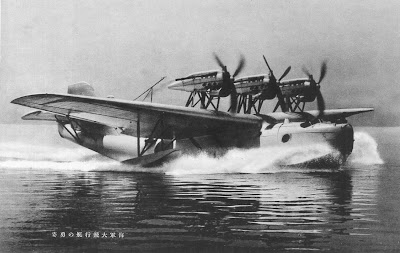 Postcard from the Arawasi Collection
Posted by Arawasi