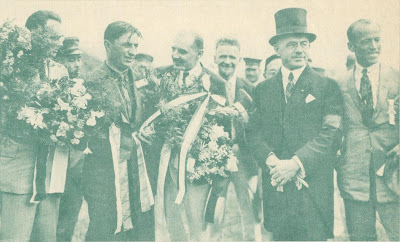 "Czecho-Slovakian plane, piloted by Lieut. Colonel Skala arrived at Tokorozawa Army aerodrome on September 4. The picture shows the airman with mechanic Taufer being greeted at the aerodrome. Mr. Svagrovsky, Czecho-Slovakian Minister, is seen with the airman." 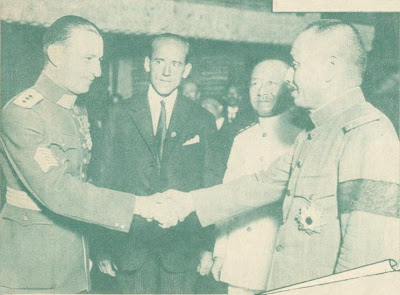 "The Czecho-Slovakian airman, Lieut.-Colonel Skala, is seen exchanging greeting with general Shirakawa, War Minister and Admiral Okada, Navy Minister when a welcome luncheon was given in his honour at the Imperial Hotel, September 5. M. Taufer, mechanic, is seen in the centre."


Miroslav Kárník of RISING DECALS sent us the following information:
The flight from Praha (Prague) to Tokyo (cicra 23,000km) was undertaken by pplk. Jaroslav Skála and mechanic Matej Taufer with Czech bomber/scout aircraft Letov Š-16 in 1927. In the attached links you can see some photos of the aircraft, a map of the flight and more.
Fragment (tail fin) of the aircraft is on display in the Museum of Flight in Praha (Prague) - Kbely - link for photos here. Link with details about the flight here. Link about the aircraft, here. Video from Czech TV about the flight, here.
Letov Š-16 is probably one of only two Czech pre-war aircraft that flew to Japan. The next aircraft was Zlin Z-XII (here). The other pre-war Czech aircraft with hinomaru was Avia Ba-33 (here) but it flew only in China, not in Japan.

Thank you very much Mirek and Peter for the additional interesting information.

Our friend Yokokawa Yuichi with the fantastic blog (HERE) sent us today one more photo (from here) of the arrival of Skála/Taufer in Tokorozawa.
どうもありがとうございます 横川さん 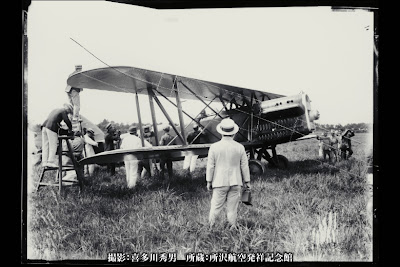 We also discovered one more photo in our vintage publication archives. Harold K：
George, from the photos of the rudder in the Praha-Kbely museum, can you translate for us the Japanese inscriptions on it? 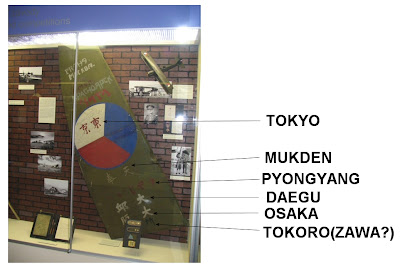 Mukden is present day Shenyang in NE China. Pyongyang and Daegu are in North and South Korea respectively. Half of the last name is hidden. The visible part could be read as "Tokoro". HTH.

Dekuji Mirek and Peter :-)
My mother's parents came to the US from what is now Slovakia; so I have a great interest in Czech and Slovak aviation history.
I was aware of this flight (Prague - Tokyo), but have not seen this much about it in one place before.

George, from the photos of the rudder in the Praha-Kbely museum, can you translate for us the Japanese inscriptions on it?

Arigato, George; that does help. I have to assume that the Cyrillic lettering likely names other stops, in the USSR, on the way to Japan.
Many thanks.