Nakajima Ki43-II Hayabusa (US Codename 'Oscar') with experimental ski landing gear; aircraft 'Red 13' of an unknown IJA unit; Manchuria, 1944
This model was specifically built for the Arawasi Wild Eagles blog's "Hayabusa Model Contest" in April/May 2017 - and it is the guesstimate, based on a conversion set and a vague frontal picture of a real aircraft.
Inspiration struck when I came across a Rising Decals conversion (from the Czech Republic)set for an experimental Ki43 with wooden, retractable skis - tested in Manchuria in 1944. The set comes with finely crafted and moulded resin skis, plus a decal sheet for the rather bleak aircraft in natural metal finish. Anyway, I found the idea worth to become an entry, and took action.
The kit and its assembly:
The basis is the venerable 1:72 Hasegawa kit of the Ki43-II, a simple kit with good detail and fit, even though you get raised (though very fine) panel lines. The kit was basically built OOB, with only some detail additions in the cockpit, and I modified the wings and lower fuselage in so far that the "butterfly flaps" were added in extended position. 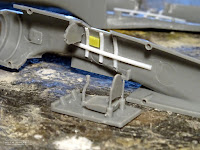 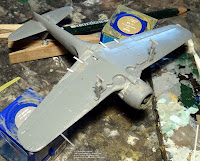 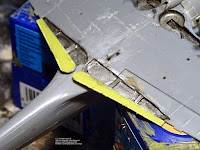 Concerning the ski landing gear, I did some legwork, and eventually found a Ki43-II with the same landing gear arrangement as the conversion set, but it also featured a four-bladed propeller!
The wheeled landing gear was simply replaced by the resin struts from the conversion set, the skis are separate pieces that fit neatly into each other and into the kit.
The propeller was scratched from the three OOB blades, plus a trimmed donor blade. The spinner is the front end of a German 250 kg bomb. Inside of the engine, a styrene tube was added as propeller mount, which received a long metal axis.
A venturi tube was added under the fuselage, too, and the canopy separated into two pieces for better display.
The frontal benchmark picture of "my" Ki43-II shows the aircraft in clean configuration, but I decided to use/add the underwing tanks in order to avoid filling the respective holes in the wings - and it makes the aircraft look more interesting, IMHO.

Painting and markings:
Concerning the aircraft's livery, I basically stuck to the machine depicted in the conversion set and on the few pictures of such machines - even though the info sheet states that "markings are uncertain".
Anyway, I went the suggested overall NMF route with grey-green fabric (individually mixed from Humbrol 90 and 155) on all rudder surfaces. As a personal note, and as an interpretation of the benchmark photograph of the Ki43-II I tried to build, the model received a worn and flaking cowling in IJA Green and Grey. The latter was also used for the drop tanks, with red primer showing through the tanks' front end. A black anti glare panel was added in front of and behind the canopy.

The cockpit interior was painted, based on Hasegawa's recommendations, in a greenish brown tone (a mix of Revell 45 and 16). The landing gear wells and the interior of the flaps was painted with Aodake Iro - and instead of mixing a metallic blue tone as a single tone I rather laid down an Aluminum base and added a clear, greenish blue lacquer on top - just like the real thing. The deep yellow ID markings on the wings' leading edges were painted with RAL 1028  (Lufthansa Gelb, Revell 310).
The skis appear to be massive wood pieces, and they were painted accordingly with a wet-in-wet mix of red brown and cream, for a streaky look, mimicking the wooden structure.
After basic painting (a basic coat with acrylic Aluminum, Revell 99), everything done with brushes and minimal masking, the kit received a light black ink wash, in order to emphasize engravings. For some "depth" effect, panels were post-shaded with Polished Aluminum Metallizer (Humbrol 27002) on top of the acrylic Aluminum base. During the polishing process with a piece of soft cloth, some grinded graphite was rubbed over all surfaces, too, creating a slightly worn and uneven look. This little trick also enhances the metallic shine of the surface, making it look less "painted". Graphite was also used in order to simulate light exhaust stains on the Hayabusa's flanks.
Once the (very thin and delicate) decals were in place, they received a light treatment with Aluminium and sand paper, in order to simulate some wear on the aircraft's surface. Finally, everything was sealed with a coat of semi-matt acrylic varnish, just the rudders and the anti-glare panels received a completely matt coat. 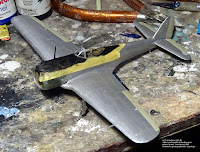 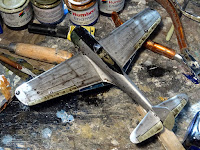 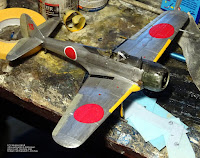 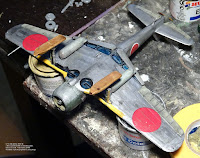 A quick build, done in less than three days from sprues to photo shots. Anyway, the model should rather be regarded as fictional, since my information basis has been rather corny and relied on very limited references. But I am, nevertheless, happy with the result, and I hope the model conveys the original idea of the converted Ki43 with skis? 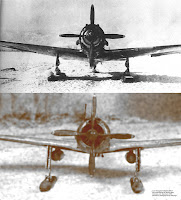 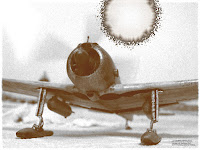 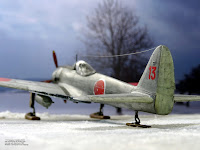 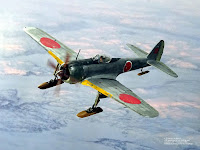 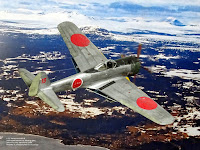 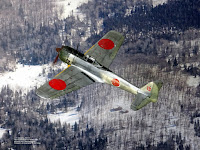 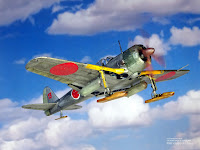 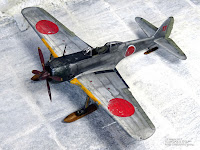 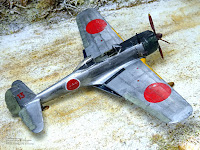 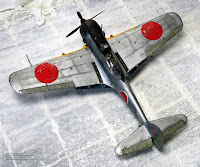 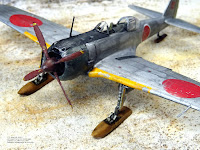 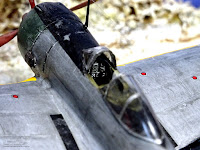 Fascinating subject. I never knew they tried a 4 blade propeller on a Ki-43, and with snow skis no less! Does anyone know of any reference literature that talks about this, such as FAOW, Maru Mechanic, etc?

The model is terrific and I give it a 4.7. Thank you for tackling this unusual subject!

Very interesting! I like the way you take on an unusual subject and bring it to life. 4.9

The concept of an Oscar wearing skis is unusually exceptional. The model on the other hand has its flaws like the out-of-scale interior detail and the flaps. 3.4 from me.

Interesting idea but to me, the original photo presented in the article looks rather suspicious, due to the exhaust pipes that are too big and are protruding too much outwards.
The way skis are jointed with landing gear legs makes it hard to believe they can be retracted inwards. Flying with landing gear down and with auxiliary tanks mounted, would have been a nightmare for a pilot.
Anyway, the construction of the model has many faults: huge reinforcements in the cockpit, rear canopy glued shifted to left side, antenna cable loose, scratches allover the model. And the paintwork the same.
3.4 for the unusual subject.

Hmmm...the subject is certainly unusual and the presentation excellent. I understand it's DizzyFugu's style and I totally respect his choices but the model itself looks very roughly done to me. Sorry. 3.9

A very interesting subject to build. I too have the resin parts waiting for use.
For me however, I too feel that it's a bit rough overall.
3.7 for me.