Here is my final entry for the current online model contest.
This is a Ki-61 "Hien" which was taken over by the Chinese Nationalists at the end of the war, and flown by the 6th Fighter-Bomber Group at Nanyuan Airfield, near present-day Beijing in their battle against Mao Tse Tung's Communist forces.
I had already painted this model when I acquired a copy of Kecay's wonderful book "Japanese Planes in Foreign Service", which contains a profile depicting the aircraft with plain (i.e. uncamouflaged) wings.
Doh! On reflection, however, I believe I can make out a fairly strong case for the wings being camouflaged after all. So far as I am aware, there are only two photographs in existence of this aircraft, and in neither are the wing upper surfaces visible. In one of these photographs a small part of the starboard wing root can just be seen, and it does indeed give the impression of being plain. However, this may simply be due to any camouflage pattern being masked by specular reflection. In any event, common sense says that the Japanese (from whom the camouflage was presumably inherited) having taken the trouble of camouflaging to the fuselage would not have left the wings uncamouflaged, since this would have made the aircraft highly visible from above. There rests the case for the defence!!
Dragon 1/72 scale kit, decals included in kit.
With best wishes,
- Derek Cooper - 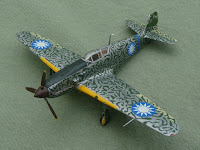 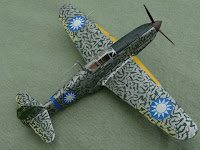 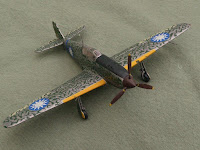 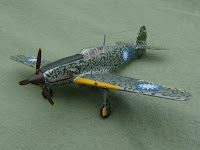 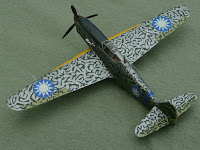 Very nice and in 1/72 scale so even more impressive. And I agree with Derek, why paint the fuselage and not the wings? Unless for some reason the Chinese removed the green camo from the wings. 4.9

I like a lot the overall effort except for the IFF stripes. No problem with the camouflaged wings as Winds Swords noted. 4.8

A meticulous work on the camouflage - very good! Some weathering, particularly around the anti-glare area, would have made it perfect.
4.8

Yes, well done on the camouflage! 4.8