This model represents one of several Zeros that were captured by the Allies at the end of the war and evaluated by the Allied Technical Air Intelligence Unit - South-East Asia at Tebrau in Malaya. This particular example was an A6M2b but (from photographic evidence) was evidently retro-fitted with long-barreled cannon in the wings. Airfix 1/72 scale kit with decals from Max Models and turned brass cannon barrels from Master Model.
The paintwork on the aircraft was obviously in a very worn condition, and I have shown the bare metal showing through. In retrospect, however, I think it maybe this should instead be the standard factory grey-green finish of early Zeros. Too late to go back, however! 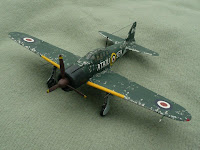 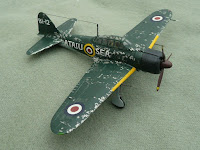 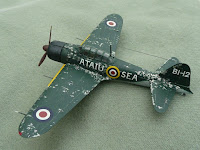 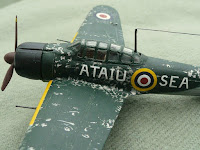 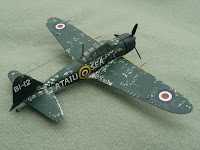 Great model! 4.8
The chipping looks very realistic. I guess you're right with regard to the color undercoat.

Great job on the weathering - 4.7. I wonder why they replaced the cannons with the long barrel version (from an A6M3 or A6M5 I guess)?

Yes, I like it a lot! The weathering could show the gray underneath or the red-brown primer or even the metal, depending how old and worn the plane was. Photos of this particular plane show it in very worn state with the metal showing in places, exactly as you have depicted it. 4.9