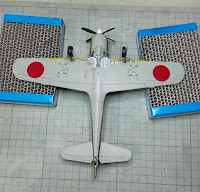 I would like to say a few words about this kit and the challenges it presented from a beginner modeler's perspective like the one I am. I wouldn't normally bother with an old kit (like I did here) but since Tamiya decided to re-issue the same old crap with their beautiful Kurogane and modelers still struggle with it, I feel a detailed review is in order.

"Wind Sword" and "Toryu" already commented that it's a 1/50 (at least some parts) kit with most panel lines raised and only a few (the wing cannon access panels and around the cowling) engraved. The fit is okay at most places except for the wing root area. Any effort to fix the gaps will probably result in loosing the raised panel lines. I used fuselage halves from 2 different kits and they didn't fit exactly resulting in more sanding and more raised panel lines lost.
The cockpit is very basic. The application of the decal set for the instrument panel was bizarre. Tamiya instructions call for the decal to be cut in two and then applied to each fuselage half.

No reason to do that. Just cut the decal in the shape of the instrument panel, (don't remove the decal in water, leave it on the paper) and stick it directly on one fuselage half .
But the worst of all is the canopy which is given in 3 separate pieces. The front and middle fit okay but the rear is a joke and the result is a very weird looking canopy. Choosing to have the canopy open will result in showing the poor cockpit. I checked various on-line videos showing canopy masking techniques and tried a couple, especially the "masking tape - mechanical pencil - cut masking tape to shape" but nothing worked due to very shallow canopy frame lines. I opted for gradually masking one frame line at a time for the middle and rear parts and toothpick for the front. The masking worked well, the toothpick less so, again due to shallow frame lines.
The landing gear is not bad but the wheel covers are way too thick and trimmed mine to satisfaction. I used stretched sprue for the break line; I should have used fishing line which is more flexible to curve. Didn't bother to follow the instruction to glue the landing gear in the "correct angle". 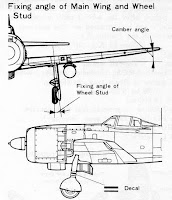 The wing cannons and pitot tube are really silly but a minor frustration.
The decal set now. 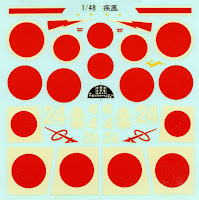 Depending on the age of the particular kit you may get hinomaru in different reds. In the old set above their more bright red, in the newer set below (the ones I used on my model) they are much darker. In my opinion neither shades of red are satisfying.

The Tamiya decals (even the new ones) and the old "Aeromaster" and "Super Scale" (more below) give hinomaru surrounded by white squares. Check here why this is inaccurate. In any case the Tamiya hinomaru decals I used are too thick, that's why the radio access panel on the port side of the fuselage is not visible.
As you can see the Tamiya decal set does not help with the various red or white lines on the wings of the Hayate. I used the ones provided by the "Aeromaster" set which was designed for the Tamiya kit although they are not complete (various panel lines are missing) and I ended up having different yellow for the IFF stripes (which I painted) and different for the panels. Furthermore, one part of the radio line is connected to the fuselage right where the starboard hinomaru is. So you will have to pierce the decal and pass the line through. I forgot this detail and didn't want to risk ruining the decal, so the line was wrongly placed on the fuselage beyond the hinomaru.
The propeller is another area where the decal set is a let-down. Tamiya provides decals for only the interior yellow marks. I painted the rest of the yellow lines but I ended up with different yellows. The instructions call for the rear of the propeller blades to be painted red brown. AFAIK the propeller blades were green front and back. Hasegawa recommends MrColor #319.

I didn't have this paint around so I lightened up MrColor #129 (Dark Green Nakajima). I'm not at all unhappy with the result.
I painted my model using Hasegawa's instructions, top MrColor #304, bottom MrColor #128.

For the cockpit I tried to understand what "aircraft colour & paint guru" Nick Millman says in his blog but I got more confused than enlightened (my fault ofcourse) so I painted the cockpit with MrColor #130.

I'm happy with the result and the cockpit interior is barely visible so I won't lose any sleep if the color is not accurate. I did the wheel wells silver. In all the photos they look bright, so definitely not aotake. They could be the same with the wing underside color or maybe not.

Markings.
I wanted to do the "90" "Hayate" of the 102 Sentai as seen in the photo HERE. There are no decals for this specific aircraft in 1/48. Lifelike in their first "Hayate" set do give 102 Sentai tail marking with red over white surround. The white surround could be used but then you will have to find a number "90" from somewhere else. Also it is doubtful the decals would fit the Tamiya kit and I don't see any reason to waste such fine decals on the Tamiya kit; better to be put them to use with the Hasegawa kit. And so, for the very first time, I decided to paint and mask the tail marking. I printed the photo, D. Chouinard sent over artwork but somehow the correct shape of the tail marking with the pointy rear ends didn't register in my head and instead I did the "official" version. I found number "90" decals from the old Nichimo IJAAF "Akatonbo" kit in 1/48 but were too thin and the white "90" doesn't stand out as it should. So, I'm fairly happy with my first homemade tail markings but, damn, I screwed up the correct shape. That should teach me not to work on 6 different "Hayate" model projects and an article at the same time.
Posted by Arawasi

George, you did a very nice job. The finish looks very good.

Hi George, you did very well with this old horse - I don't know why you consider yourself a beginner?? I like the top colour and the wing root chipping, the bottom looks too grey to me (should be more creamish) but it may be tinted by the lighting. I'd give it a 4.8.
Now for the model: I don't remember having had many problems with my build which has been entered in this contest. OK, I was no expert 30 years ago, but somehow the model appealed to me. My main problem with it is the odd scale. Funny that I particularly liked the canopy which, I think, has a nice silhouette (see my pictures). It looks like I moved the antenna mast backwards which doesn't leave enough room on your model.
In my philosophy, as I mentioned in some other blog, there is no kit however old which cannot be turned into a good model. And you proved it!

I always appreciate those that tackle older kits. Your Ki-84 proves that older kits can make respectable models and you did a commendable job George. The olive green is very pleasing and the wing root and fuselage weathering is very delicate and not over emphasized. I enjoyed reading your description of the kit and some of the challenges you encountered during the build, 4.5. Keep on building!

This one sounds like it fought you all the way? I must say, though, a very good result. The method of attaching the control panel decal reminds me of the old Monogram kits. The colors look perfect to me, although I know that the gray bottom color is hard to photograph. Weathering looks good too.
A word about decals: i have seen hinomarus in all shades of red, from bright to almost red-brown. The reality is in there....somewhere.

We are always our worst critic. I think this is a fine result. On my Tamiya Frank the main frustration was with the cowling. It didn't want to fit and I could see daylight (actually lamplight) at the join. That's what I get for spending 5 bucks on a already opened kit at a model show, but it was cheap and on my income that had a lot of appeal to me. There were more frustrations (like the instructions were in Japanese or the decals that were too thick AND ripped), but back to George's model. Knowing what he went through I want to give him a 4.9 (I don't give 5.0) but in my mind a fair assessment would be 4.7. A more than well done job on a difficult kit.
This almost makes me want to share mine, if only as a cathartic exercise of my experience.

Good job. I'm 4.7.
I'm so sorry I do not know English. That is why I would like to ask for an understanding of my austere answers.

George if you are interested in makings for Ki-84 "90" as referenced in your article, we can cut a set of stencils for you. Painting markings on a model is not as challenging as it appears and it eliminates all of the hassles associated with decals.

Thank you all for your comments and generous voting. M. Furry, will take you up on your offer. Thanks again.