In this series of postings we will examine the various decals available for "Hayate" kits and see how accurate they are.
We will start with the Tamiya kit options and first of all the 11th Sentai "46".
Here's the Tamiya recommendation:

The particular aircraft is a quite famous one. It belonged to the 2nd Chutai of the 11th Sentai and was captured by US forces at Clark airfield, Luzon Island, Philippines. There are four USAAF photos I am aware of. 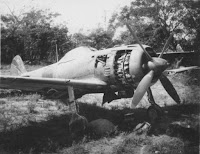 The unit was established in June 1932 as 11 Daitai and was initially equipped with Nakajima Ko.4, Nakajima Type 91 and Kawasaki Type 92 fighters. They became 11th Rentai in December 1935, then 11th Sentai in August 1938, changed to Nakajima Ki-27 "Nate" fighters and saw plenty of action in Nomonhan and China. They were re-equipped with Nakajima Ki-43 "Hayabusa" (Oscar) in August 1942 seeing action in the Solomons and New Guinea and finally got their first "Hayate" in March 1944 at Tokorozawa. On May 12 the unit came under the 2nd Hikoshidan and by the end of the month had 54 "Hayate" in their strength but more than 30 pilots were not yet trained with the new fighter. There were also maintenance problems with not enough spare parts, heavily oil leaking engines, high fuel temperatures, problems with ignition plugs and more.
On September 15 US forces landed at Palau and Halmahera islands and so an attack against the Philippines became imminent. Therefore the unit on October 2 relocated to Yilan in Taiwan with 40 fighters. Their main job was air defence but on October 12 there was big air battle and the unit lost the sentai commander Major Kanaya, two chutai commanders and many pilots of middle skill. One pilot, LT Shishimoto Hironojo (an 11 Sentai ace with seven kills and seven probables who survived the war), was hit by enemy fighters, bailed out with his parachute and was attacked by the enemy. Major Kanaya tried to help him and that's when he was lost.

The book: "The Second World War in the Air: The Story of Air Combat in Every Theatre of World War II" by Merfyn Bourne mentions:
As a preliminary to the invasion of the Philippines a major air attack on Formosa was planned. This would serve the double purpose of neutralizing the largest Japanese base in the area and at the same time suggesting that the island was to be the target of the next American strategic move though, in truth, the real identity of the next target was by now pretty clear.
From 12th to 14th October 1944 the aircraft of the U.S. 3rd Fleet pounded the airfields and docks of Formosa and B-29 bombers based in China joined in. After an administrative reorganization the 3rd Fleet under Admiral Marc Mitscher was now the carrier striking force of the U.S. Navy, though it still came under the authority of 5th Fleet of Admiral Spruance. It now comprised 17 aircraft carriers with numerous escorting ships and over 1,000 aircraft. As a preliminary to the Formosa raids the fleet had made air attacks on Okinawa and Luzon Island in the Philippines but the three days at Formosa were the centre-piece of the softening-up campaign. The Japanese Navy had 350 aircraft on Formosa but many more on Luzon, Okinawa and Kyushu, the homeland's southernmost island. In all there were perhaps 1,000 aircraft able to join in the battle. They were sent against 3rd Fleet in wave after wave but their efforts were fruitless. 500 Japanese planes were shot down or destroyed on the ground but the Americans lost only 125. The carriers Franklin and Hancock both suffered damage and the cruisers Canberra and Houston were more heavily hit but no ship was sunk. Admiral Fukudome, who commanded the Japanese air forces on Formosa commented that his planes were like 'so many eggs thrown against the stone wall of indomitable enemy formations.'

While the unit was trying to gain it's strength in Taiwan, orders arrived to participate in the battle for the Philippines and on October 22 seven aircraft advanced to Malcat airfield, south of Clark airfield, in Luzon Island. The next day five or four of these aircraft together with 10 aircraft from the 1st Sentai relocated to Lipa, and on the 24th they participated in the 1st Leyte massive attack with bombers from the 3rd Sentai. All the 3rd Sentai aircraft were lost and most of the rest received heavy damage. The remaining 10 pilots of the 11 Sentai returned to Malcat, left their aircraft there and returned to Japan mainland reaching Shimodate, Ibaraki Prefecture, by transport on November 4. While in Malcat the pilots were joined by the new sentai commander Major Mizoguchi who travelled with them back to Japan.
The unit was reorganized and managed to have 40 aircraft in its strength but also had many pilot of low skill and flying experience. This became evident when on December 7 the unit left Japan to return to the Philippines. Due to many emergency landings only half the aircraft managed to reach Porac airfield on December 17. By that time the US forces had established air supremacy and the first operation the 11th took part in was on December 18 against the airfield of San Jose and enemy ships. On that day Capt Kawagoe failed to return and the next day again during an attack against San Jose, the commander of 3rd chutai, Ikeda, shot down two enemy aircraft but himself failed to return. On December 20, the 11 Sentai escorted "toko" aircraft which managed to sink one transport and set on fire another. Following this the unit was busy with air defence and night attack duties sustaining heavy casualties.
On December 24, more than 30 US bombers attacked Clark airfield and the 12th Hikodan, of which the 11th Sentai was part of, together with the 22nd Hikodan were ordered to intercept but managed to put together only about 28 aircraft. According to one source the 12 Hikodan had only six operational aircraft. On January 9, 1945 when US forces landed on Lingayen Gulf there were no more operational aircraft left. The unit returned to Taiwan on January 14 and then on March 1 back to Shimodate, then on to Takahagi, Saitama Prefecture where they were training when the war ended. At that time the unit was equipped with about 40 "Hayate".
According to Gakken#46, "Hayate" "46" was sent to the 11th in the Philippines after the time the unit had returned to Japan to recuperate in the end of October, beginning of November 1944.
According to Katagiri Hiroshi in MA#283, though, the aircraft arrived to the Philippines in the middle of December 1944 when the 11th returned there and was captured by US forces the same month. It is said that the name Lt Hirokawa was somewhere written on this plane.
Serial number was "1146" (therefore the "46" on the tail) and the aircraft was first evaluated by TAIU receiving the code "S17" then sent to the US finally reaching the Chiran Peace Museum in the mid-1990s. It is the only surviving "Hayate" in the world.
Although Tamiya recommends "dark green" for the upper color, "46" has been depicted by artists sometimes with green, sometimes with "olive drab" or "brown" top.

It is very difficult to tell color from the available photos above. Very often these are reproduced in publications as very dark suggesting a darker, maybe green, top color.

According to Gakken #46 the first "Hayate" were delivered NMF from the Nakajima factories with anti-glare in front of the canopy, red warning lines on the wings and hinomaru without white surrounds. The characteristic of these early "Hayate" was the drop-tank under the fuselage; no drop tank attachments under the wings. These NMF aircraft often received green camouflage on their upper surfaces.
Furthermore, as early as August and as late as October 1944 the units started receiving new "Hayate", with drop-tank attachments under the wings, and with new official paintjob of "olive drab" (kimidori 7go or yellow-green number 7) top, "gray" (hairyokushoku or gray green) bottom.
The "46" is thought to be produced in November 1944 therefore it would fall in the "olive drab"/"gray" group indicated by the drop-tank attachments under the wings but also the yellow warning lines on the upper surfaces of the wings.
Although the 1st Chutai of the 11th Sentai had the "denko" (lightning) tail marking in white, the 2nd Chutai in red with white surround and the 3rd Chutai in yellow with white surround, I have found no mention anywhere that the color of the tail marking was repeated on the spinner. Therefore the red spinner suggested by Tamiya or the red-brown suggested by Sky Models are at least dubious. The propeller looks to be in the standard green with yellow tips and warnings but interestingly the yellow tips are repeated in the rear too.
Note the excessive dirt on the wheel covers and that the top color is repeated on the wing edges of the under-surfaces, a most unusual feature for a "Hayate".
Hasegawa has released a kit of the "46" with bombs under the wings. Not strange considering the unit was involved in night attack missions but the box cover illustration shows the a/c in green top (I don't know what color is recommended in the instructions). 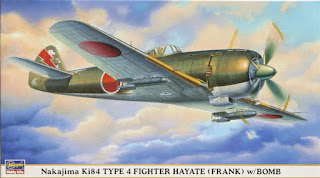 In conclusion, I would say that the illustration by Katabuchi-san in Gakken #46 is the most accurate depiction of this "Hayate".
If you know of more decals or kits with the "46" drop us an email.
Below is a video, from HERE, of Japanese aircraft captured in the Philippines including the two "Hayate" that were captured and evaluated.

Very good research, George! I agree with you that the Gakken side-view is probably the most accurate. Even the bottom colour looks better than in most drawings/recommendations (a brownish grey - not green-grey).
Just a small remark concerning the rank of Sentai commanders. The US equivalent for a Shosa would be Major in case of Army, not Lieutenant Commander (LTCDR) which is a Navy rank. In the Royal Air Force the correct equivalent would be Squadron Leader.
Please keep on with these most interesting Hayate articles.

Thanks a lot Toryu. Fixed. Glad you liked the article.

Great article! Olive green can be a hard color to nail down. I know it can oxidize quickly, and tends to go more brown with age depending on the pigment and binder formulation.