The 58th Shimbu-tai was mentioned briefly in the previous post. It is the last option in the Tamiya decal set.

There are very few photos of this unit. The most famous is the one below.

The unit was organized in Akeno Kyodo Hikoshidan together with 57, 59 and 60 Shimbu-tai, all equipped with "Hayate". Unit Commander was 2Lt Takayanagi Takashi with 11 other pilots. They received their aircraft at Shimodate airfield, Ibaraki Prefecture, and started training. On May 17 together with the 57th relocated to Hofu airfield, Yamaguchi Prfecture and seven days later advanced to Miyakonojo East airfield. The next day nine "Hayate" carrying two 250kg bombs took off and attacked enemy ships in the Okinawa area. On the 28th the last surviving pilot, 2Lt Konda Hiroshi took off on a suicide mission.
The unit's marking is a skull with crossbones over a boiling cauldron which in Japanese is called kamayude. Check the story of Ishikawa Goemon, a legendary outlaw hero, to see how he was executed.
Nohara Shigeru created artwork featured in Model Art #451

And while things may look straightforward enough, unfortunately, as of is the case with Japanese aviation, there are a couple issues. First of all "4" doesn't have anti glare panel in front of the canopy which is highly unusual and puzzling. If the aircraft was finished at the factory as the hinomaru with white surround suggests then it should have anti-glare. Note also that it is definitely brighter than "7" which has anti-glare.
Below is artwork I found on the net by a Japanese illustrator called "tamamichi8749".
I think it's more accurate overall. 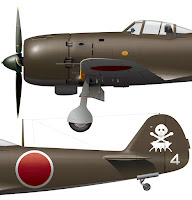 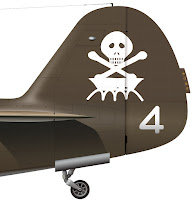 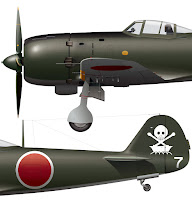 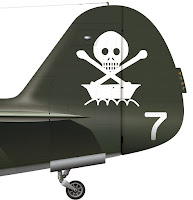 We hope you enjoyed this series of postings. We will come back to the subject in the future. Stay tuned!
Posted by Arawasi

Plane 4 in the photo has no anti glare panel.

First off, I really like Tamamichi8749's artwork. I'm not 100% sure of this, but the 4th aircraft in the photo looks to be missing the anti glare panel? Did they ever stop painting the anti glare panel at the factory? That's the only reasoning I can come up with; to save time during the finishing process.
Interesting story behind the markings, thank you!