This one is the last post, from the San Diego Air & Space Museum Archives, with the aircraft being on board USS Barnes. I believe the following photos show them being unloaded, so the location should be Norfolk, Virginia.

The Nakajima B6N "Tenzan" (a/c number 10) with the folded wings is next.


The Kawasaki Ki-102b and one of the four Mitsubishi Ki-46-III "Dinah" are the last two planes in this series.
The best source I know of for these aircraft is the classic "Broken Wings of the Samurai" by Robert C. Mikesh, which should not be missing from your Japanese aviation library. There is extensive information in the book including the fate of these aircraft once in the US which I will not reproduce here out of respect to the author. For research purposes though and to answer your questions I will include only two pieces.
1. p.115 "Three aircraft carriers were involved with this post-war move of Japanese aircraft to America. The first boat-load to leave was on the USS Barnes (CVE-20), which departed Yokosuka on 16 November 1945, followed that same month by the USS Core (CVE-13). The last of these carriers for this collected assortment was the USS Bogue (CVE-9), which left the day after Christmas, arriving at Alameda Naval Base on 8 January 1946. Most, if not all, of the Bogue's deck cargo of Japanese aircraft continued with the ship through the Panama Canal to its destination at Newark, New Jersey on the east coast. Among the aircraft unloaded there was Japan's only surviving four-engined land-based bomber, the Nakajima G8N1 "Rita"."
2. pages 116~117 include the only inventory that has been located in the US of the aircraft aboard these aircraft carriers. It is the inventory of Japanese aircraft aboard USS Barnes reported November 3, 1945. The list includes the serial numbers and the fate of some of these aircraft which I will not include (get the book!). So here's a list of what Barnes carried as reported in the book and in color the aircraft we have identified in the photos so far:
Our good friend Devlin Chouinard created the illustration below to help us all identify and visualise the aircraft as placed on the deck of the carrier.

Here are the photos once again identifying the aircraft. 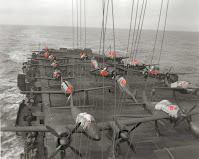 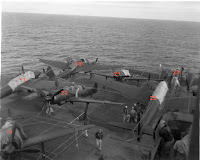 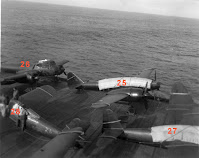 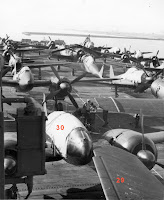 
Once again, thank you all for your help to identify the aircraft. If you have spotted any mistakes or have any different suggestions please let us know.
Posted by Arawasi

So that Ki-109 was not aboard Barnes, it seems.
I cannot find any more photos of Bogue with captured a/c on deck, other than those on navsource I referred to in the other post.
Maybe in a book somewhere ...

Some great work there, I love the deck layout illustration. Superb!

One minor correction, photo #27 of the Nakajima Tenzan gives a good view of it's individual engine exhaust pipes. I therefore believe aircraft #10 is a Kasei 25 powered B6N2 version.
Interestingly, the USS Barnes inventory states that the B6N2 is a Model 13. If so, then it would be one of only two B6N2s to be modified with the Kasei 25c engine which served as prototypes for the B6N3 Model 13.
From Japanese Aircraft of the Pacific War by Rene J. Francillon: The two Model 12s modified with the 25c engine were production numbers 751 & 752. The Barnes inventory lists Serial Number 5752 for the B5N2, so it could well be one of the prototypes...
(I'm not sure why the two B6N1s are given as Model 12 in the inventory. I would have thought they should be Model 11s. Hopefully the serial numbers could be used identify them correctly).