Harold K spotted a new release by Avi Models, AVI72009 Gasuden KR-1 "Chidori go" in 1/72. It's a "Limited edition with resin parts" and includes decals for a Japanese, registration J-BBJI, which belonged to the Nippon Koku Yuso Kenkyusho (Japan Air Transport Service) and another in the service of the Kaijo Keisatsu Koku Butai (Maritime Police Air Unit) of Manchukuo.
The MMPAU had three Gasuden "Chidori-go" in their fleet. Two with MMPAU serial numbers "KaiKei 12" and "KaiKei 13" were KR-1s and another, "Kai Kei 14", was a KR-2. More in our currently sold-out but soon-to-be-revised-and-republished "THE EAGLES OF MANCHUKUO, 1932-1945: An Illustrated History of the Civilian and Military Aviation", HERE.
The kit looks nice although I spotted a few small innacuracies.
I  think this is a future release as price is not mentioned in the AviModels site.
A very interesting and welcomed release, I guess they will do another one with floats, that I will try to get if the price is right (usually the AviModels kits are sold for crazy money in Japan) and I guess they will do another one with floats.
The Gasuden "Chidori-go" KR-1 & KR-2 will be covered in detail in our future magazine issue #15.
Thanks Harold! 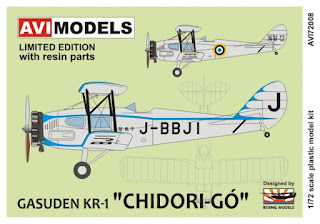 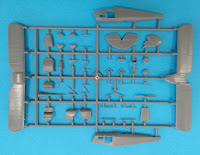 It is out in Europe at around 20-25 euros on czech online shops.
The other bit of news is that there is a Alf with radial engine as future release.....