Apart from photos the "Asahi Shimbun" collection also includes videos. Below are stills from a video dated November 30, 1940 and the caption mentions: "Delegations arrive for signing of China-Japan Treaty Concerning Basic Relations in 1940".
The aircraft is a Junkers Ju 86 belonging to the Manshu Koku K.K. (Manchukuo Aviation Co., Ltd.) fleet. It's name was "Shoryu" (ascending dragon), written on the nose sides, and had the civilian registration M-222. A VERY rare footage of a MKKK Ju 86.
The politician that disembarks from the aircraft is Zang Shiyi, who was serving as ambassador of Manchukuo to the collaborationist Reorganized National Government of China headed by Wang Jingwei. On that day, Zang Shiyi signed for Manchukuo the Japan-Manchukuo-China joint declaration, in which the Wang Jingwei regime recognised the country. It was part of the Basic Treaty by which Japan recognised the Reorganised National Government.
HERE is the link for the complete video. 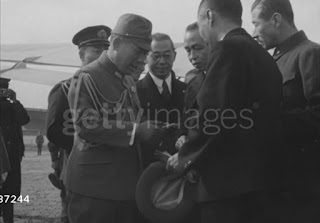