Another photo from the "Asahi Shimbun" collection. On May 5, 1943, Japanese Prime Minister Hideki Tojo landed in Nichols Field, an airfield south of Manila, for a state visit to the Philippines. On his right is General Wachi Takaji, Chief of Staff of the 14th Army responsible for the Philippines.
At least three Mitsubishi MC-20 transport aircraft are seen in the background. Unfortunately no tail markings are visible. 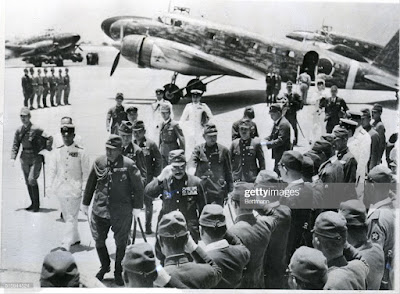 There is also a video from the NHK collection.

The Second Philippine Republic was established a few months later, on October 14, 1943, during the Japanese occupation.
Posted by Arawasi

Great photos and Thanks for the rare find !

I wonder if anyone has ever attempted to convert the existing Ki21 kits (Revell or MPM) into this Ki57 "Topsy" version ?