Two photos from the "Asahi Shimbun" collection featuring the Nakajima G8N1 "Renzan" (Rita) captured at the end of the war and shipped back to the States for evaluation.

The caption of the first photo mentions:
This is the Japanese "Rita" bomber, St. Newark Air Base, where technicians are completing the job of overhauling it for its test flight to Wright Field, Ohio, on June 21st. The only four engine Japanese bomber in existence, the "Rita" was captured in Japan and shipped here. At Wright field engineers will conduct extensive tests on the bomber to see if the Japanese had any ideas that may be useful to our aircraft industry. 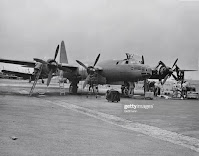 The caption of the second photo mentions:
The only four-engined Japanese bomber in existence takes off from Newark Army Base with an American pilot at the controls. The plane, dubbed "Rita" by the Army Air Forces, is an experimental model that the Nips were never able to perfect for combat. Captured in Japan, the bomber was shipped to Newark, where American engineers studied it made it ready for the June 22nd test hop to Wright Field, Ohio. 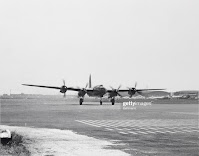 One of my favorite Japanese a/c and these pics are new to me; thanks for them.

Thanks for posting these photos!