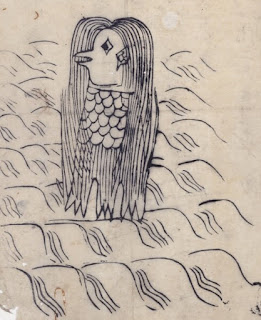 Amabie, is a legendary Japanese mermaid with three legs, who allegedly emerges from the sea and prophesies either an abundant harvest or an epidemic.
According to legend, an amabie appeared in Higo Province (Kumamoto Prefecture), around the middle of the fourth month, in the year Kōka-3 (mid-May 1846) in the Edo period. A glowing object had been spotted in the sea, almost on a nightly basis. The town's official went to the coast to investigate and witnessed the amabie. According to the sketch made by this official, it had long hair, a mouth like bird's bill, was covered in scales from the neck down and three-legged. Addressing the official, it identified itself as an amabie and told him that it lived in the open sea. It went on to deliver a prophecy: "Good harvest will continue for six years from the current year; if disease spreads, draw a picture of me and show the picture of me to those who fall ill." Afterward, it returned to the sea. The story was printed in the kawaraban (woodblock-printed bulletins), where its portrait was printed, and this is how the story disseminated in Japan. (from Wiki)
In other words, those who have seen even a depiction of an amabie will be protected from disease. I still think a vaccine is much better, but you never know, right?
I think this shopkeeper from Napoli best expressed our feelings towards 2020. 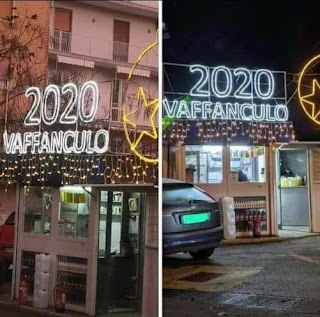 So, let's put behind us the terrible year that just ended and find some optimism to hope that 2021 will be better and most importantly healthier.
We hope our blog kept you company this year too.
A special thank-you to everybody who contributed this year: Jean Barby, Luigi Scarano, Jan Kanov, Paolo Sonego, Rodolfo Bräuer, Miloslav Hrabaň (I haven't forgotten), Michael Furry, Zbyszek Malicki, Alvaro Lino, Miro Herold, Vladimir Martinicky, BaronVonRob and Pat Donahue.
We hope everybody else who contributed in the past but not this year, is still a Japanese aviation fan but more importantly healthy.
And finally a HUGE "thank you" to our good friends:
Sinang Aribowo, James Boyd, Devlin Chouinard, Danilo Renzulli, Zygmunt Szeremeta and Eric Vogel.
The latest news of our very much anticipated Eagle Eye #3 on the Mitsubishi Ki-21 "Sally" and the Fiat BR.20, is that it has reached a whopping 160 pages (!) with the most detailed and accurate drawings of the "Sally" ever produced. That's all I will say about the contents for the moment. We promised ourselves that it will come out some time during the first quarter of 2021.
All the best for the new year to everybody out there.
Posted by Arawasi

Beautiful summary.
I would like to thank everyone who takes care of our entertainment and proper education. You are doing a great job.
By 2021, I wish everyone a lot of strength and patience. Strong health and everything that will be needed.

Hi George, where did you find that Naple's shopkeeper sign? You made me laugh quite a lot -however it is what we deeply feel about 2020.
Again all the best to everybody (...and can't wait for eagle Eye #3!)

All the best wishes for 2021, to you George, Kiri and everyone who visits this great website. 2021 sounds already promising with the publicing of Eagle Eye #3, i look forward to it.