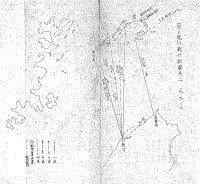 And below is a map from Wiki showing the area.

Shinchiku is shown as Hsin-chu. Fuchow is shown as Fu-chou.
The map below shows the area the unit provided air cover with 24 Zeros on September 27.

And finally the map below shows the air cover 32 Zeros of the unit provided when the transports retreated to Taiwan. 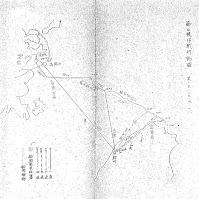 October
[Starting from October 10, the U.S. Task Force 38 (TF38) with 17 aircraft carriers, six battleships, four heavy cruisers, 11 light cruisers and 57 destroyers, begun a series of attacks against Japanese military installations on Okinawa, the  rest of the Ryukyus and the Philippines but primarily against airfields in Taiwan.
More, here.
The first major air battle over Taiwan was on October 12, and below is the Combat Report of the 312 Hikotai.]
12/10 - Anticipating enemy attacks the plan called for three chutai to patrol over the base.
The 1st with 14 a/c, commander Lt Katagi Keiji,
the 2nd with 8 a/c, commander LTJG Otsuki Yosaburo
and the 3rd with 11 a/c, commander LTJG Meguro Yoshihiro
06:20 - four Zeros Model 52 took off on patrol.
07:20 - they located about 20 Grumman F6F and TBFs 5km north east of Shinchuku, flying at 2500m. The Zeros attacked shooting down one enemy aircraft but losing two of their own. The remaining two aircraft returned to base at 07:45.
Below is a map from the Combat Report showing the movement of Japanese and enemy forces and the Japanese bases. 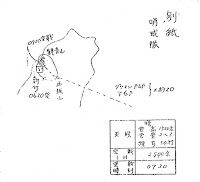 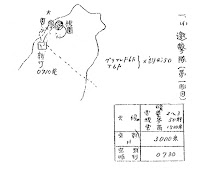 In the 2nd exit three shotai took off; total 12 Zeros. A mixed formation with pilots from all three chutai. Obviously pilots that survived the first battle flying a/c in good condition.
07:50 - two a/c of the 1st Shotai took off from Shinchuku
08:20 - spotted enemy a/c at 2500m in the area between Shinchuku and Taipei but there was no air battle.
08:43 five a/c of the 2nd Shotai took off
08:45 - they engaged in air battle with six Grumman F6F over their base. They claimed two shot down, losing one of their own while another received hits. Three Zeros landed in Taichung, one in Taipei.
10:00 - five Zeros of the 3rd Shotai took off, but spotted no enemy a/c.
16:50 - returned to base. 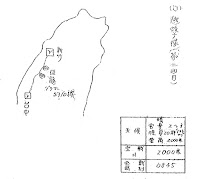 In the 3rd exit only three a/c took off at 09:10. They engaged in aerial battle over Houlong with enemy a/c at 2500m. Claimed two shot down, losing two of their own. One pilot parachutted and suffered only light injuries. 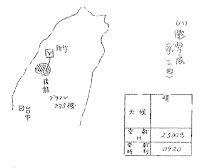 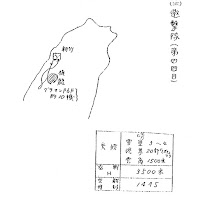 Obviously this is the force of "50 enemy fighters and bombers" the 1st exit of Zeros encountered at 07:20. Here's what the "Action Report" says about the encounter.

From the numbers of a/c launched and landed, it seems that the "First Sweep" and "Strike 2A" lost five VFs and two VBs. The 312 Hikotai  claimed 31 a/c including probables and admitted losing at least 12 of their own.
Another Action Report mentions a photographic mission over Shinchuku.

These would be the five Zeros of the 2nd Shotai of the 2nd exit. Certainly no "Shoki".
For the rest of the day, Intrepid a/c attacked Matsuyama airfield and "Kiirun" harbor and did not engage any Zeros.
I believe the 3rd and 4th exits encoured U.S. a/c operating in the central Taiwan section.
Need to find which U.S. a/c carriers operated there and their combat reports if available...
On October 15, a combined force of 11 Zeros from the 312 Hikotai with five Zeros from the 201Ku, were to escort three "Betty" bombers from the Kogeki 718 (or 708, the entry is not clear) and one more "Betty" from Kogeki 702. One "Gekko" from the 804Ku was to complete the whole formation that was to attack the enemy fleet.
The 312 Hikotai Zeros took off at 09:15 but soon six of them had to return to base because of engine problems. The rest of the formation encountered unfavorable weather and at 11:05 three Zeros were forced to return to base. At 11:30 four more Zeros gave up and returned to base. But around that time a force of about 15 F6Fs was spotted and only three Zeros were able to engage them. One Zero was shot down another failed to return to base and the last one managed to do so at 12:50. During that encounter two "Betty" bombers were also shot down. 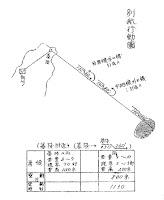 The next day, October 16, 14 312 Hikotai Zeros with one "Suisei" from Kogeki 5, one "Betty" from Kogeki 704 and two more "Bettys" from Kogeki 708 made an attempt to reach the U.S. fleet.
The Zeros took off between 11:45~11:53 but at 13:00 received radio reports that about 20 large size enemy aircraft were raiding Takao airfield. At 13:30, while flying towards Takao, the bomber unit mistook friendly a/c for enemy fighters and returned to base. The Zeros encountered heavy fog and were ordered to return to base. One of them had a landing accident but was not seriously damaged.