A close-up of another well-known photo from the same publication reveals more 312 Hikotai aircraft. Note that their spinners are either brown or white.

The publication "Tatakau Zero-sen" by Watanabe Yoji, features a photo of the maintenance unit commander of the 407 Hikotai, Lt Amanuma Hikoichi (?). In the close-up, it seems the Model 52 he is standing in front of had a different tail marking before the "221-D14" was applied. It's another Nakajima-built Zero and note the wing hinomaru with the thin white surround. 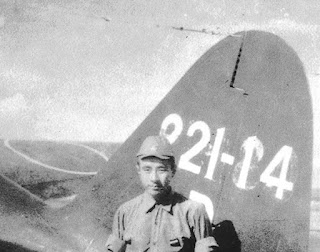 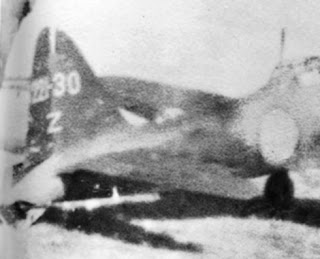 Photo detail above from "Tatakau Zero-sen". A Nakajima Model 52 Otsu with dark surrounds on the hinomaru of all top surfaces and two 150litre drop tanks under the wings.
Although no other Japanese publication knows the significance of this "Z" , Watanabe Yoji alone reveals in the above mentioned book, that within the 407 Hikotai there were groups of aircraft assigned to the fighter-bomber role and the "Z" signified this.
Detail of a well-known photo featuring "221-Z27". A Nakajima-built Model 52 Otsu, with two drop tanks under the wings and fuselage hinomaru with a darker surround. Note the white spinner.

Photo detail below from KFI #53. 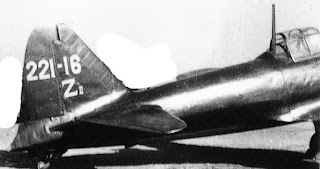 "221-ZII16" is a Mitsubishi built Zero. Note the fuselage hinomaru without any visible surround. The top wing hinomaru are not visible but they would be either with a white surround or a darker one.
Another photo of the same aircraft, detail from a well-known photo, showing the two drop tanks and the brown spinner.

A detail from the same photo. 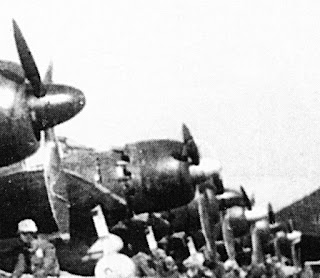 If this aircraft line-up is the same as seen in the photo above, then "221-D18" has a white spinner and no wing drop tanks, and the "221-D60" doesn't have drop tanks either and has a brown spinner.
Posted by Arawasi

Good reading, lots of information. George, thanks for this work.

Fascinating ! so many questions, so many answers.Thanks