A group of Mitsubishi Ki-21 Model 2 Ko today of the Hamamatsu Bombing School flying near Hida Mountains, a Japanese mountain range which stretches through Nagano, Toyama and Gifu prefectures 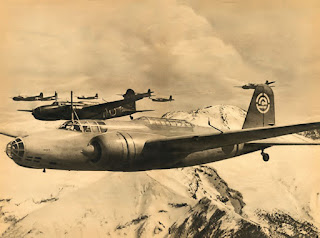 Of interest is the bomber in the foreground. It is finished in overall hairyokushoku, the standard finish of ALL "Sallys". To make it more clear, there were no unpainted, silver or in NMF "Sallys". Nakajima Ki-49 "Donryu", yes. Ki-21s, no. One of the major differences between Mitsubishi and Nakajima aircraft.
It is of interest because it is one of the very few photos of Model 2 "Sallys" without a top camouflage. It seems that this aircraft was delivered directly to Hamamatsu from the factory, instead of first going to an IJAAF Arsenal where all the Model 2 "Sallys" were camouflaged.
The serial number is not clearly visible. I would say "4369" which means it has a Sumitomo propeller, also indicated by the fixture on the spinner tip for the starter track.
Posted by Arawasi