Yet another photo from the "Asahi Shimbun" collection, this one featuring a scene inside the Mitsubishi factory in Nagoya at the end of the war. According to the caption of Model Art #470 which includes a similar photo, the "Raiden" in the photo is a Model 11 or J2M2, serial number 2024 and it belonged to the first unit to be equipped with the type, the 381 Kokutai. We included a brief history of the unit with their "Raiden" in an old post, here, so I will connect the two posts. 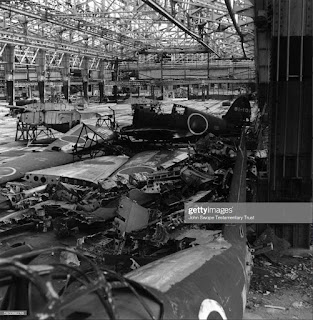 The first unit to receive the "Raiden" was the 381ku organised on October 1, 1943, in Tateyama base, Chiba Prefecture. The unit was to be assigned to the protection of the Balikpapan oil fields of Borneo so it was deemed a suitable unit to receive an interceptor fighter. The unit relocated to a bigger base in Toyohashi, Aichi Prefecture, but "Raiden" were barely delivered! In February 1944, the unit had only ten "Raiden" even though the unit was to be equipped with at least 36. On January 5, 1944, during shooting training the engine mount of the 30th production J2M2 lost its strength and dissolved in the air resulting in the death of the pilot. Due to such accidents, further modifications to the type were required causing further delays in the production. So the 381ku quit to be a "Raiden" unit and changed to Zero 52s and relocated to Borneo from March of the same year.
Posted by Arawasi