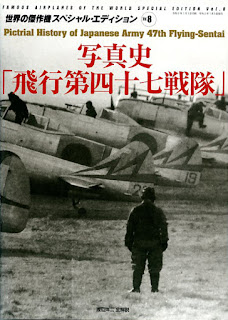 This new special FAOW is of the usual size in the series with 128 pages and about 300 b/w photos. Artwork is by Ninomiya Shigeki with seven side and two (small) top views. As with the previous FAOW Special, it is all written by Watanabe Yoji based on a series of articles published in "Koku Fan" magazine.

It seems that Bunrindo is following the steps of "Dai Nippon Kaiga" and for the first time has released a special dedicated on an IJAAF unit. Plenty of colorful "Shoki", "Hayate" and "Hayabusa" photos, some well known, some less so, with even more photos of the unit pilots and personnel. A really very nice publication although unusual in that it deals with only one unit. Ofcourse it's all in Japanese, which means the rest of the world will just have to stare at the photos. Personally I like it more than the "DNK" ones. Better photo quality, publication size and overall information. Clearly Watanabe knows his subject a lot better than the "DNK" authors.

Highly Recommended!
Naturally available from our on-line store, HERE, for $US20 (postage not included).
Posted by Arawasi