Sir Francis Charles Chichester was a brave aviator from New Zealand who visited Japan in 1931. His aircraft was a de Havilland Gipsy Moth, fitted with floats, registered ZK-AKK and named "Madam Elijah". With this small aircraft with an engine of only 100hp he set out to circumnavigate the world departing from Sydney on July 3, 1931. On the 17th he arrived in Manila having flown over New Guinea and then proceeded to Taiwan and Shanghai. From Shanghai he flew to Kagoshima arriving on August 13, a distance which normally took 5-6 hours but in his case it took more than 10. This caused some concern to the Japanese authorities questioning the flier as to his whereabouts and demanding him to describe in detail the cause for the delay. The suspicious pistol with the 17 bullets he had in his possession didn't help either. But once cleared Sir Francis flew to Katsuura harbour, Wakayama the next day, arriving at 15:30. On August 15 he set out to continue his attempt flying to Kasumigaura, taking off at 9:50 but while flying at a low altitude the port wing hit some telephone cables, cutting two but also loosing the port float which caused the aircraft to lose balance and fall in the sea. Sir Francis was seriously injured and had to be hospitalised at the city's local hospital for at least 40 days while his aircraft was completely destroyed thus giving a rather unfortunate end to the bold attempt. 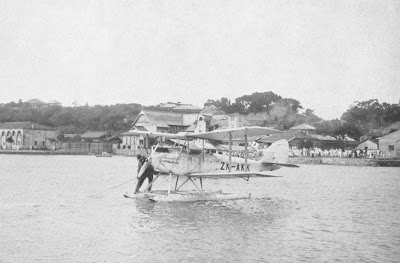 This is very interesting material.

Are here any chances to find any images of Jaspanese DH-60 "Moth" aircrafts ?

Any help is Welcome !

The English class system strikes again - "Sir Chichester" is not correct usage. Just "Sir Francis" would have done. However, I don't think he had been knighted at this time (I could be wrong).

Thank you Graham. Will correct right after this comment.