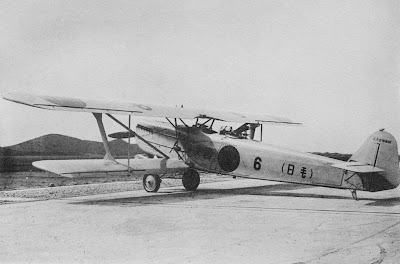 Aikoku #6 was a Type 88 Reconnaissance or Kawasaki KDA-2 that was donated by Nippon Keori KK (Nippon Woolen Co Ltd) (see also Hokoku #1, here) on March 13, 1932 during a ceremony that took place at 10:00 in the Joto Parade ground of Osaka. The ceremony was concluded with captain Hayashi taking the plane for a spin. He flew over Osaka, Kobe and Himeji but encountered heavy clouds on his way to Kakamigahara and returned to Osaka flying over lake Biwa.
The plane saw action during the Pacification_of_Manchukuo and on a bombing mission on September 9, 1932 the engine cooler was hit by a/a fire. Pilot 1st Ltd Kinoshita and rear gunner Sgt Yamagi managed to safely land the plane west of Jinzhou but during the night a number of "bandits" completely destroyed the plane. No information exists regarding the fate of the crew. 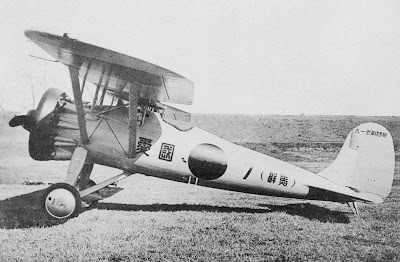 Aikoku #7 was a Type 91 Fighter or Nakajima NC that was donated by citizens of Gunma prefecture during a ceremony that took place on March 8, 1932 in Takasaki. The serial number of the plane was "171".
Posted by Arawasi