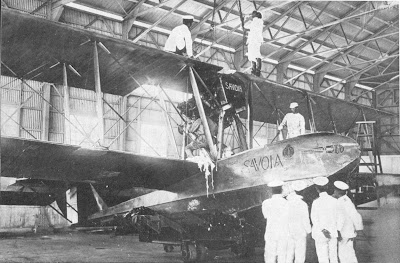 On September 1925 pilot Francesco De Pinedo with engineer Ernesto Campanelli landed with their Savoia S.16 flying boat named "Gennariello" at the Navy base in Kasumigaura. They had started from Rome on April 20 and covered 55,000 miles in six months flying to Japan via Australia and back to Italy!
After Australia they continued through the Philippines leaving Luzon on September 19 and reaching Tamsui in Taiwan the same day. On the 21st they departed early in the morning and reached shanghai at 14:00. Two days later departed from Shanghai and reached Mokpo in (South) Korea where they spent the night at a hotel and experienced the hospitality of Geisha for the very first time in their lives leaving the next day, September 24 at 12:40, with particularly fond memories. At 16:40 they had to make an emergency landing at Kushikino, Kagoshima prefecture but managed to reached Kagoshima on the 26th.
During their stay in Japan they were invited to numerous celebration parties and were presented with a medal by the Teikoku Hiko Kyokai (Imperial Aeronautic Association). They Italian aviators left Kasumigaura on October 17 and reached Rome on November 7.
Some more details on THIS site.
Posted by Arawasi