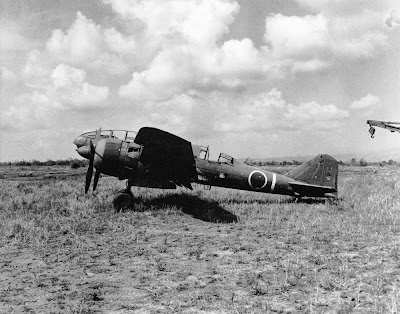 A little known photo from the NARA collection of a Type 100 Command Reconnaissance Aircraft or Mitsubishi Ki-46-III Ko. Photos of the same plane are featured in FAOW#38 and according to the caption this Dinah was captured by US forces in Luzon's Clark airfield. Although the camouflage looks to be light green, it is actually dark brown (ankashoku) following the IJAAF orders given in Autumn 1944. Although not visible in this photo there is a bomb rack under the starboard wing for air-to-air "Ta-dan" bomb.
It does not seem to have any unit marking on the tail, unless it was a small one on the tail missing part.
Posted by Arawasi

I'm wondering if you have more information about this photo - do you know where in NARA it is held? Or the date when this photo was taken?

Why are asking? What is so important about this particular photo?

I'm an archivist for a documentary series, and we're telling the story about an Australian base, where there is wreckage of a Mitsubishi Ki-46 (obviously not the same plane). We are looking for a clear image of a Ki-46 to use to show what one looked like, and the producers would like to use this one, but need to confirm when it was taken to confirm copyright status. Do you have any indication of when this was likely taken?

You could email me if you are looking for more information about the series or this request?

Sorry I can't help. But if you are looking for A photo of A "Dinah" why don't you ask at the archives of the Australian War Memorial? They have a big collection of images.