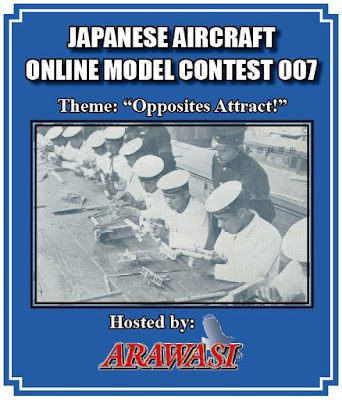 ARAWASI would like to invite you to our Double-Oh-Seven online model contest.

Theme: "Opposites Attract!" (captured aircraft; Allied by the Japanese or Japanese by the Allies)*.

Deadline: March 15 (but it can be extended)

Prizes: The winner (or winners) will receive a book and a kit from our on-line store, free of any charge, courtesy of Arawasi.
*No evaluated or built under licence types. Here's a partial list of the possible captured-by-the-Japanese-Allied-planes: Polikarpov I-15 & I-16, LaGG-3, Curtiss P-40, Hawker Hurricane, Brewster Buffalo, Douglas A-20, Boeing B-17, North American P-51C Mustang, Martin B-10 Model 166, Curtiss-Wright CW-21, Ryan ST and others.
Japanese aircraft in US, British, French, Chinese or Soviet (in other words THE ALLIES) markings are also in. No Japanese aircraft in Thai, Manchukuo or Indonesian markings.
Best references (apart from past Arawasi magazine issues) are the books:
1. "NIHONGUN HOKAKUKI HIROKU"
2. "TORAWARE NO NIHONGUNKI HIROKU"
Flying Papa's has released various decal sets in 1/72 and 1/48 and our "Evalina" decal set is still available.
Max Models have also release two sets of decals in 1/72.
And let's not forget Arawasi decals set AR-48005 of the "Evalina", in 1/48.
The theme for the next online model contest is Nakajima Ki-84 "Hayate" (Frank) and will start from April.
Posted by Arawasi