This is my modest contribution to the contest ( George,without your help I could not have build this one!). Building isn’t so easy for me anymore because of tremor in my hands but I still like it a lot.
An  A&W 1/144 resin  of the Tachikawa Ki-54-C "Hickory".
There were some fitting problems to fix but I can live with the result & it is a nice plane to look at.
For this kit I used Tamiya acrylic white mixed with a little yellow. The RAPWI (Recovery Allied Prisoners  of War & Internees) decal was made on scale by Black Lion Decals (in Holland) and for the Green Crosses I used strip cut out of  an all green decal film.
The history:
After the surrender of Japan there was a need to to bring the P.O.W’s and  civilians of  the camps in Indonesia  to safer places. There was a shortage of  transport planes and because of that a number of  Japanese planes in airworthy condition were put in that role. Some ten Ki54’s were used and not seldom flown by Japanese crew. When they were repatriated the planes flew with a British and/or Dutch crew. Because of accidents, lack of spare parts and sabotage no more than three were in service by mid 1946
- Jacob Terlouw - 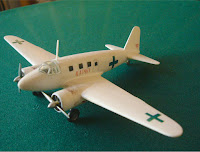 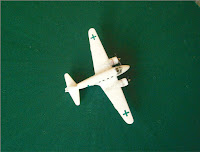 Great subject and unusual history make for a great model. 4.5

Cute little model. It must have been difficult to apply the dwarf markings. I wonder where you get such small pincers to do this... 4.7

Interesting historical report and a nice build.
Something a bit different in all that sea of military planes.
4.7

WOW! What an unusual model in such a small scale. Love it! 4.9