Another photo from the "Asahi Shimbun" collection. According to the caption:
PHILIPPINES - NOVEMBER 05: Members of first Japanese Special Attack Unit "Banda Tai" lines up at a Japanese Imperial Army frontline base on November 5, 1944 in Philippines. 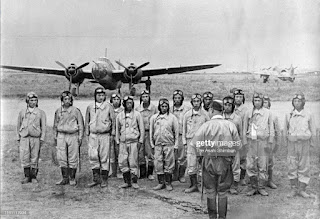 "Banda-tai" was indeed the first IJAAF taiatari unit organized with members from the Hokota Kyodo Hikoshidan. On October 20, 1944 the school received a number of Kawasaki Ki-48 "Lily" bombers modified for suicide missions. The next day 16 members of the special unit were announced. Unit commander was Capt Iwamoto. The "Banda-tai" arrived in Lipa airfield in Luzon Island, Philippines after stops at Kakamigahara, Ganosu and Chyayi (Taiwan). In Lipa they spent some time training and maintaining their planes.
The unit made three attacks. On November 12, 1944 with four "Lily" bombers, on November 15 one aircraft and on December 20 one more.
Originally the "Lily" had three 3-meter long rods with fuses protruding from the nose which connected to the bomb in the bomb-bay which could not be dropped.
But later, in the Army Arsenal in the Philippines, there were aircraft with only one rod and the bomb could be dropped.
Posted by Arawasi