In this part we will examine the aircraft found by U.S. forces in Okinawa.
The first video, from here, features in the beginning a Nakajima Ki-43 "Hayabusa" (Oscar) with only a "よ" (YO) on the starboard side of the tail.

The photo below, from NARA, shows the same "Hayabusa" which is a Ki-43 Model 2 Kai, serial number 7345. The unit is not known, but there is a good possibility it belonged to a tokko unit. On the rudder on the port side of the tail it is written "㐧一飛" (Dai 1 Hi), meaning probably "Dai 1 Hikodan or Hikoshidan" (1st Air Brigade or 1st Air Division). 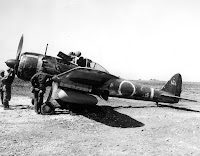 Note the tail marking and the serial number. 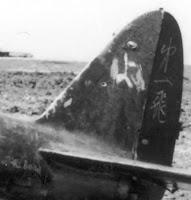 According to THIS Japanese site with a very good collection of NARA photos, on April 1, 1945, two tokko units, the Makoto 39 Hikotai (Devotion(?) 39 air unit) with six "Hayabusa" and the 20 Shinbutai with one "Hayabusa" took off from Nyutabaru and Tokunoshima respectively. It seems that the pilot of the "YO" "Hayabusa" thought that Kita airfield (aka as Yomitan or Yontan) was still in Japanese hands and made a landing there. The 20 Shimbutai pilot is known to have carried two 250kg bombs and to have perished, but not much is known about the "Makoto 39 Hikotai" and their fate.

After the "Hayabusa" there is a Kawasaki Ki-61 Model 1 Tei "Hien" (Tony) belonging to the 55 Sentai. The unit used a different marking after their return from the Philippines in February 1945, so this aircraft with the older marking of the unit was probably given to a tokko unit. There is an unusual band behind the cockpit which has been depicted as yellow with white surround in the latest Model Art #733, Profile #1. Personally, I can't see any yellow in the color film, if it was yellow there would be no point to have a white surround and the artwork has missed the blue tip of the spinner. In my opinion, it is more probable that the band behind the cockpit is blue.

The plane was then rough handled by a buldozer... 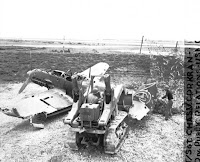 The next aircraft in the video is a Mitsubishi Ki-51 "Sonia"...but more about it later.
The last aircraft is, I believe, the tail of a Yokosuka P1Y "Ginga" (Frances) belonging to the 763 Kokutai.

The photo below, from NARA, shows what happened to it and many other of the planes found in Yontan airfield.