Instead of videos we start the post today with two photos of Mitsubishi G4M "Betty" bombers. 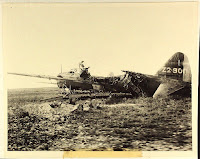 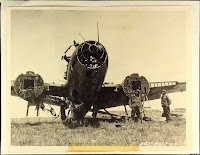 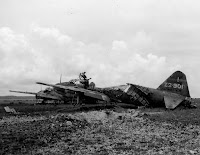 The tail marking of one "Betty" is clear; "Z2-901". This means it belonged to the 751Ku which was based on Tinian Island, next to Saipan, from May 1943. In September of the same year relocated to Rabaul. The unit returned to Tinian on February 18, 1944, and five days later took part in the Battle of the Marianas. According to Akimoto the unit used the tail marking "Z2" from autumn 1943 until around Match 1944.Then changed to "51" and again to "751". FAOW mentions that the letter "Z" meant the 21 Koku Sentai and the number "2" signified the second group inside the sentai.
The origins of the 751Ku were the Kanoya Kokutai, a mixed unit with carrier fighters and "Betty" bombers, which at the beginning of the Pacific War was the second unit of the 21 Koku Sentai. KanoyaKu was renamed 751Ku on October 1, 1942,  and a month later the fighter group became 253Ku while the bombers retained the 751Ku name.
Going back to the photos (top two from here, bottom two from here) it is clear that the "Z2-901" "Betty" was used as a hack since the engines and all the important equipment had been removed. Also, in the second from the bottom photo, a second "Betty" is visible behind "Z2-901". On p.46 of FAOW#59 there is another photo showing the two bombers, and the second "Betty" is without a tail number but has a rudder lock.
Both bombers were rather violently moved to form a heap of aircraft pieces near the hangars of Aslito Airfield.

The earliest image of this heap can be seen in a short, about 3-4seconds, fragment in a getty movie. The still below shows the tail of "Z2-901" still fairly intact.

From that point on the condition of the aircraft in the heap started to deteriorate rapidly.
In the photo below, the "Z2-901" is on the extreme right of the heap with the elevators gone and the port stabilizer broken. Note the almost intact fuselage and the port wing of the "Betty" without a tail marking mentioned above (photo NARA, Arawasi collection).

Below is the first video from the getty collection showing the "Betty" without tail marking.

Some stills from the video.

In the NARA photo another prominent feature is the front of a Showa L2D right next to the tail of the "Betty". This starboard wing and the bent fuselage of the L2D and the "Z2-901" can be clearly seen in the two videos below.

In the stills below note the very different greens of the "Betty" and the L2d and the color of the anti-glare panel on the nose of the "Betty".

Unfortunately the full tail of the L2D is not visible except for the last digit "2".
Let's see more videos of the rest of the heap.

In the stills below, we can see first a marine taking the chance to paint.

The "Betty" without a tail marking. Note the very small "112" to the right of the "Betty" dorsal gunner...

...and the roller that can be seen on the extreme right of the NARA photo.

Here's another photo of the "Betty" without tail marking in the foreground. 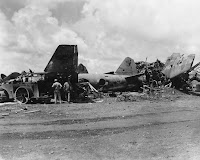 Two more photos of the same "Betty". Note the gradual deterioration of the wreck. 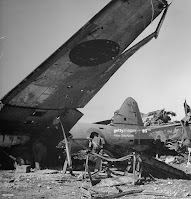 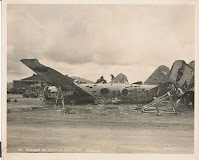 Of interest is the presence of another "Betty" behind the one without a tail marking.
Close ups below. 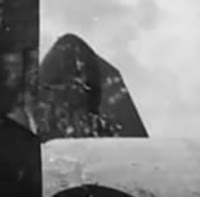 It seems the tail marking is "731-??". At the moment I have not been able to locate a "731" unit. Leave a comment if you have any information about this IJNAF unit (not the notorious biological warfare unit).

The last video, from here, is b/w but offers some interesting information about the tail markings.

In the first still we can see the tail of the L2D and it seems that the "112" was written all across the tail of the plane. There are two suspicious white bands above and below the numbers and perhaps there was something more where the hole is.

The second still shows the tail of the "Z2-901" "Betty". Compare the condition of the wreck with the getty still at the top of this page.

Here's a final photo of the heap. 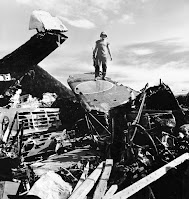 At the very end of the third video, at the far right of the screen there is an unusual P-47 Thunderbolt. The fuselage is some kind of flat olive drab but the large cowling is silver/aluminum.

Super cool footage and the color plates are just exceptional....Yes I spotted the P-47's as well and one appears to have had it's cowling removed ?

Thanks again for the rare phots and fim clips !

If I'm not mistaken, the distinguishing feature of this group is the unpainted engine cover. The rest of the aircraft was painted Olive green or Field green. White or silver tail. Blue / black stripe. I'm not exactly sure and I don't have books to find anymore.

You are correct Sir !

Indeed those are the markings of the 318th FG "Pineapple Express" Thunderbolts O/D, White tailplanes etc...with a memory like yours who needs reference books :) ..Well Done

I was happy to help, it was lucky that I got something out of my head. ;)