The video today, from here, is really short and doesn't offer many details.

Nevertheless I found on-line a few really interesting and dramatic photos of Japanese aircraft wrecks.
The dramatic first, from here. 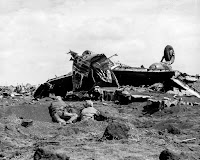 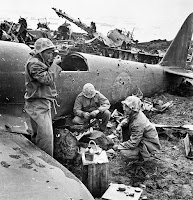 The tail marking unfortunately is not very clear. Any ideas?

The other set of photos is even more interesting.
They feature a Mitsubishi Ki-46-III "Dinah", from here and here, and the tail marking is clear.

We discussed this particular tail marking and the unit it belonged to, here and here. We concluded that it belonged to the 4th Dokuritsu Hikotai. Personally, I believe that these photos prove beyond any doubt that the video is not of some random aircraft used just for propaganda purposes but that the naration is accurate and that aircraft of that unit with that marking were present in Iwo Jima taking part in the raids against the U.S. held Saipan.
Posted by Arawasi