It's time to present the Zero fighters found on Saipan. The subject is very big and a whole book could be written dedicated to only these aircraft. There are researchers in Japan and elsewhere who have dedicated plenty of time on these Zeros, their serial numbers and their fate. I don't pretend to know as much and certainly don't want to "borrow" their research. Google "Zero Saipan Aslito" and you will find a lot more information. In any case, this series of posts is a chance to collect, organize and present mainly videos of Japanese wrecked aircraft while at the same time identifying specific aircraft and locations.

One of the earliest photos showing the heap (on the left) we saw in the previous post and the Zeros, is the one below. 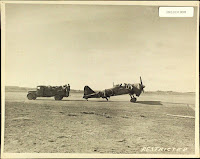 Some were found in entaigo... 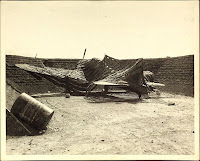 ...some were inside hangars.

Initially they were placed in front of the hangar on the left in a random manner...

Here's a bird's eye view of how all the Zeros were lined up. 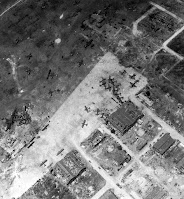 Let's first identify all the groups. 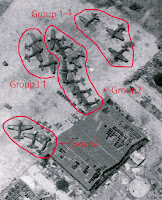 There are three Zeros in Group 1, all, at least originally, placed on jack stands.

Zero1 is seen below. 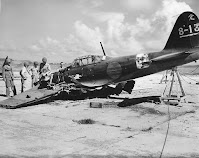 Tail number was "8-13". The kanji is actually two parts, the top part "𠆢" signifies that the pilot had the rank of an officer, according to one source. The rest of the kanji is "尾".
According to this source, it is the first part of the name "尾崎" (Ozaki), and so this A6M5 Model 52 was flown by Flight Leading Seaman Ozaki Mitsuyasu who was a member of the 2nd Daitai of the 265 Kokutai.
The unit was organized on November 15, 1943, in Kagoshima and was originally known as "Kaminari Butai" (Thunder Unit). Around May 1944 their nickname changed to "Okami Butai" (Wolf Unit) and in the beginning of the month the first group of 32 aircraft relocated to the Marianas, followed by the second group of 16 aircraft a month later. Their bases were Saipan, Guam, Yap, Ngesebus Island (north of Peleliu), Peleliu and others from where they attacked enemy ships in the Saipan area.
According to this site though, the unit has been identified as the 263 Kokutai which was organized on October 1, 1943, in Genzan, nicknamed "Hyo Butai" (Leopard/Panther Unit). On February 21, 1944, the first group of 18 aircraft relocated to Tinian Island in the Marianas but two days later almost all aircraft were destroyed during an air raid. Between the end of February until the middle of March 1945, 49 aircraft relocated to Guam, then to Peleliu for air defence and to take part in the Biak operation. During the Battle for the Marianas the unit was based on Guam Island. July 10, 1945 the unit was disbanded.
So, as you can see it is not yet clear which unit the "8-13" belonged to. There is also a suggestion that the kanji did not represent the name of the pilot but that of the maintenance group leader.
The "8-13" Zero was originally placed on jack stands but it seems the starboard fell forward and the port probably collapsed. The aircraft had suffered substantial damage and was written off.
Personally, I think it's an extremely interesting modeling subject for advanced modelers like Panagiotis Koubetsos. Hasegawa has released a kit of this Zero.

Although not confirmed beyond any doubt, I believe the photo below shows a Marine on the starboard side of "8-13". 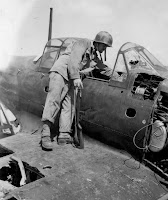 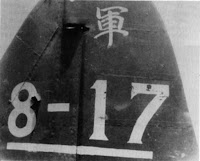