Today's video, from here, is also of rather poor quality.

But there are two interesting aircraft; a Mitsubishi G3M "Nell" and a Nakajima Ki-84 "Hayate". 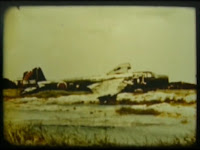 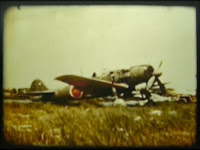 There is a very clear NARA photo featuring these two aircraft. 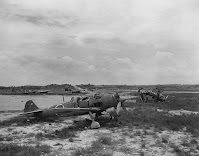 Although the "Hayate" is without a tail marking and therefore the unit is unknown, the tail marking of the "Nell" is clear; "KEA-395" which means it belonged to the 901 Kokutai.
The unit was organized on December 15, 1943, at Tateyama for patrol and ship escort missions. In the begining it was equipped with 24 "Nell" and 12 "Mavis" flying boats. Later it received a variety of types and in May 1945 the unit had no less than 212 planes.
In the middle of June 1944 the 901Ku moved to Donggang, Pingtung County, Taiwan, and then to Maizuru, Kyoto Prefecture where they sent various dispatch units to different locations. The main mission of the unit was sea patrol and the protection of the souther-west ship routes.
On January 1, 1945, it merged with the 254Ku, 953Ku and 954Ku and on March 1, 1945, the unit had 24 carrier fighters, 24 interceptors, 24 carrier attackers, 24 "Nell" and "Betty" bombers, 64 "Jake" floatplanes, 40 Kyushu Q1W "Tokai" and 12 flying boats. On June 1, the unit had a mixed force of 12 carrier fighters, 12 "Nell" and "Betty", 80 "Jake" and 42 "Tokai".

I found a couple more photos of the aircraft online, here, here.

And a small color photo from here. 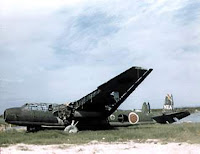 Hasegawa has a released a kit which includes decals for this particular aircraft.

This site has a few very interesting photos of wrecked Japanese aircraft found in Okinawa.

Note the Mansu Ki-79 two-seat trainer behind the "Lily".

The photos of the Nell are very interesting for me, since the aircraft has the "open O" near the Hinomaru which shows that it is equipped with an MAD (Magnetic Anomaly Detector) for submarine patrols.

The answer to the question. It's 100% Hayate. A wonderful example of its fuselage fairing. There is also a hole for ammunition. And there is also an oval cover on the side under the cabin. We don't have to talk about exhaust pipes at all. It's just a Ki-84.