We will start today with the flying boats that were found wrecked on Saipan Island. These were based on Tanapag Harbor with its two ramps. The getty photo below shows the flying boat base under attack. 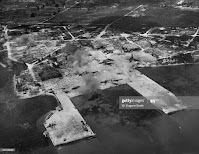 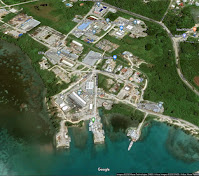 ...and they are close to the present harbor. 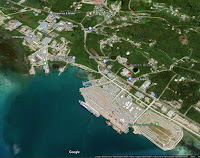 Here's another photo showing the Tanapag seaplane base or, as often mentioned, Flores Point Seaplane Base, and the Tanapag harbor in the background under attack.

Below are some more images of the area under aerial attack. 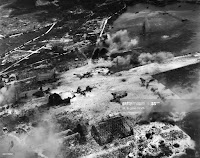 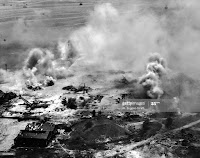 We can see that there are five Kawanishi H8K "Emily" and one Kawanishi H6K "Mavis" flying boats as well as at least two Aichi E13A "Jake" seaplanes.
The images below show their position on the harbor and ramps. 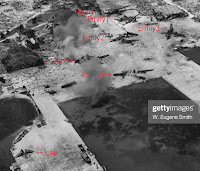 There are a number of photos and three videos from the getty collection featuring the above flying boats. Let's start with the first video.

The stills start with a search light truck...

...followed by Emily3 in the background. Note that the tail marking is something like "1-???".

Then is Emily1 in the foreground. Unfortunately the tail marking is not visible.

Mavis1 is next and we can see that the tail marking starts with the letters "KE". I don't see any red band so probably this "Mavis" belonged to the 931Ku with tail marking "KEB-?".

And finally for the armor fans there is a Type 2 Ka-Mi amphibious tank.

The second video starts with an engine that I haven't been able to identify. Your help would be appreciated.

Finally a mysterious tail pops up at the bottom of the frame with a tail marking "14-0??". I have not been able to identify the aircraft or the unit.

The third video seems to be continuing from the second as the camera moves to the right.

In the stills we can first see the few remains of Emily5 in the background on the left, then the remains of Emily4 in the foreground. Compare the size of the flying boat with the two Marines standing next to the fuselage of Emily4.

The camera moved further to the right and we can see the remains of the big hangar and a lonely "Jake" float....

...followed by what I believe are machine gun bunkers.

A few of these bunkers survive near Aslito airfield. 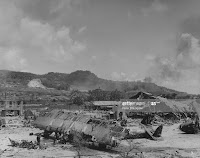 The US troops on their trucks pass right by Emily1 with Mavis1 behind them. 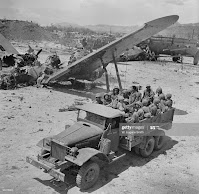 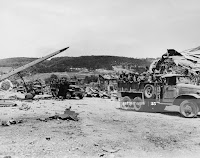 Another view of Emily1. 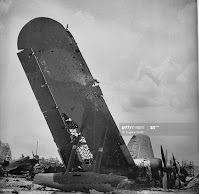 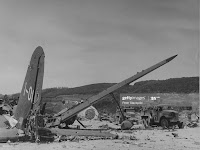 Then the troops move beside Emily3. 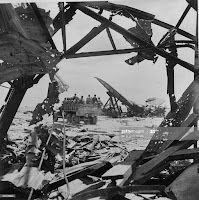 While the photographer takes a dramatic shot of Emily4 showing the tail. 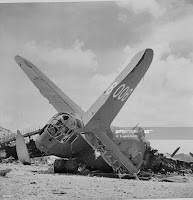 Then the photographer moves to the edge of the harbor taking a shot of the "Jake" beside Emily5 and showing the complete tail marking of Emily4; "1-006". 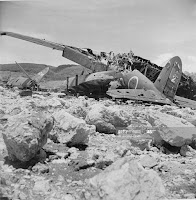 Below is another photo of the "Jake" seaplane from a different angle.

Let's see some more photos.
The first photo I believe shows the port wing of Emily4. 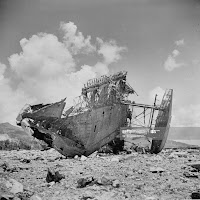 The engine, perhaps the same we saw in the video, stands at some distance in front of the wing of Mavis1. Note that in the photos at the top of the post taken during a bombing attack, the Mavis still has its wing attached on top of the fuselage. It seems that it fell in front of the aircraft some time later. 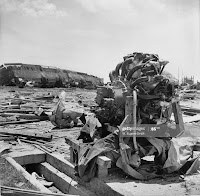 This hangar we saw on video three that was located further to the left of the port side of Emily4. 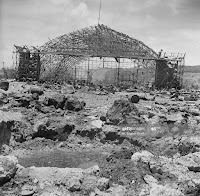 The U.S. Marines stand beside the wreck of Emily1. 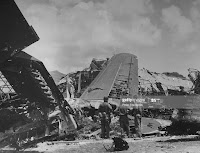 The photo below, not from getty but from here, shows Emily1 on the left in front of the U.S. marines and Mavis1 further ahead. 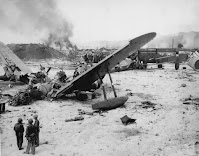 Another photo of Emily1 from here. This one is rather interesting as it shows the radar antennae on the nose of the flying boat. 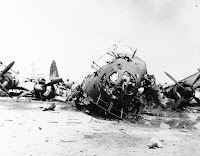 I also found one more photo of the engines of Emily1 on the net...

A classic, official USMC photo of Marines standing next to the wing of Mavis1. The sheer size of the wing is amazing. 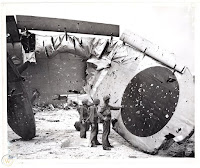 As we saw above, there are at least three "Emily" flying boats where the tail marking is completely or partially visible. They are Emily1 "1-002", Emily2 "1-0??" and Emily4 "1-006". According to one Japanese source, these flying boats belonged to the "1 Koku Kantai" (1st Air Fleet) but I have not been able to find more information about this particular unit. This post will be updated when more information becomes available.
Posted by Arawasi

An unimaginable piece of work !!! Big thanks.

Perfect work. Not in the photo with the number 14-0 Emilly 2? The location would match the photos above.
Radek Pelikán

Thank you guys.
Yes, Radek. I think it's possible.

Does anyone have an idea about which type of allied aircraft were involved in the attack ?

I enjoyed these photographs, color Emily pics are rare. Here is a gem I found buried in a 1 hr TV special all about WWII Flying Boats. At minute 44:28 color film of many (a dozen)? Emily and one or more mysterious white painted aircraft. On one pass I can see twin white tails so that must be a Mavis? I don't see any guns so I'm guessing this is at war's end.
https://www.youtube.com/watch?v=-ImwN-WDTmc&feature=youtu.be