The first thing the U.S. Marines encountered during the landing on Guam on July 21, 1944, was an Aichi D3A2 "Val". According to Japanese sources, it took off from the aircraft carrier "Junyo" and had taken part with 26 other aircraft in the second attack wave during the Battle for the Marianas a.k.a. Battle of the Philippine Sea. They failed to spot their target and on their way to Guam they were attacked by enemy fighters shooting down nine of them.
According to Wikipedia:
"A second air strike of 27 D3As, 9 D4Ys, 2 B6Ns and 26 escorting Zeros was launched around 11:00, accompanied by at least 18 A6Ms and B6Ns from Shōkaku and Zuikaku. They had also been given an erroneous spot report and could not find any American ships. The 652nd aircraft headed for airfield at Rota and Guam to refuel while those from the other two carriers returned to them. A pair of Zeros and 6 D4Ys bound for Rota spotted the carriers Wasp and Bunker Hill en route, but failed to inflict any damage on the American ships while losing 5 D4Ys to anti-aircraft fire. Radar had spotted those aircraft headed for Guam and they were intercepted by 41 Grumman F6F Hellcats. Only a single A6M5, 1 D4Y and 7 D3As of the 49 Japanese aircraft survived the encounter and landed." 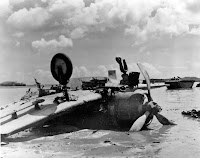 I believe the location is the Agat beach on Guam and either the same in very bad condition or another "Val" can be seen in the same location in the video below.

Another wrecked bomber was a Yokosuka D4Y "Suisei" (Judy) Model 12, tail marking "07-117" belonging to the 107 attack hikotai of the 503Ku. The unit had relocated from Truk to Saipan to take part in the aerial battle and some of the unit's bombers made forced landings on Guam.

Yet another wreck, was a Model 52 Zero belonging to the 343Ku. The unit was organized on January 1, 1944, in Kagoshima and was nicknamed "Hayabusa Butai". Originally the 343Ku was to be an air defence unit equipped with Kawanishi N1K-J "Shiden" fighters, but delivery of the new type was slow and they were mostly equipped with Zeros. Around the end of March 1944, most of the unit first relocated to Tinian, then to Peleliu around the end of May and, finally, to Palau in the begining of June. Some elements left behind on Tinian island intercepted the attacking U.S. forces and then relocated to Guam. The main force of the 343Ku that was based in Palau relocated to Yap to take part in the battle of the Marianas but also used Guam as an advanced base. The unit was disbanded on July 10, 1944, after suffering very heavy losses. 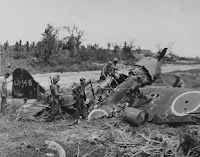 Time for our second video.

The tail marking "01-312" indicates that this "Betty" belonged to the 1001Ku which received this designation on July 1, 1943, as a specialized transport unit and, apart from transports, was equipped with a variety of types including "Betty" bombers.
Posted by Arawasi