The wrecks today are a bit more complicated and more difficult to identify.
Let's start with a video first.


In the beginning there is a "Betty" bomber the full marking of which is not clear. It is probably another 1001Ku aircraft similar to the one we saw in the previous post. So, the full marking could be "01-345".

Then there is the wreck of an Aichi D3A2 "Val".


In the beginning and the end of the video there are views of the same "Val" and the tail marking is now more clear "322-2?".

FAOW #33, has another photo of the wreck on p.75 and the caption explains that it belonged to the 322Ku. Unfortunately the aircraft did not belong to the 322Ku which was a night fighter unit equipped with Nakajima J1N "Gekko", a small number of reconnaissance J1N1-C, only about four "Val" for training (as it was also two-seater) and mostly J1N1-S night fighters. The unit was based at Katori, Chiba Prefecture, during the Marianas campaign.
Another more probable suggestion is that it belonged to the aircraft carrier "Hiyo" which used the tail marking "322" or "22" until March 1944. But the ship took part in the Battle of the Marianas carrying elements of the 652Ku with "652-" as their tail marking.

According to Wikipedia:
"Two months later [November 1943], Hiyō's air group was reconstituted in Singapore with 24 Zeros, 18 D3As and 9 B5Ns; the ship departed Japan for Singapore on 24 November. She arrived on 3 December, loaded her air group and was almost immediately assigned duties as an aircraft ferry. On 9 December, Hiyō left Singapore en route for Truk with several deliveries on the way. The ship arrived there on 22 December and disembarked her aircraft before proceeding to Saipan to deliver more aircraft. The air group was transferred to Kavieng and later Rabaul to provide air cover for Japanese operations there where the fighters claimed 80 victories in exchange for 12 losses."

Truk is 1000km distance from Guam on a straight line, so, in my opinion, either the aircraft was left on Guam during the ferry duties of the ship at the end of December 1943 or was flown from Truk to Guam around March 1944.

Another aircraft that can be seen in the video is a Nakajima J1N "Gekko" with the number "28" on the nose and tail.

On the nearby island of Tinian another "Gekko" wreck, a J1N1-S, was found and there is a nice color photo of that aircraft with the number "75" on the nose.

But also this one. 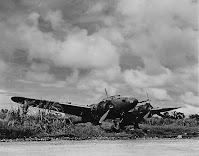 A number of "Gekko" wrecks were found on Tinian, like this one.

But the tail number is not clear enough. (all three b/w photos from here)

Another "Gekko" with partial tail marking "??-29" was also found on Tinian. This one, according to Japanese sources was a J1N-F with a turret, but it was removed and replaced with oblique firing 20mm cannons.
And finally a J1N1-C with tail marking "21-65" (see MA#510, p.244) belonging to the 321Ku.
It is very possible that all the "Gekko" aircraft belonged to the same unit; the 321Ku.
The unit was organized on October 1, 1943, at Mobara, Chiba Prefecture, the first IJNAF night fighter unit, nicknamed "Tobi Butai" (鵄 部隊) (Tobi=black kite). After the end of February 1944, the unit was assigned to Katori (Ibaraki Prefecture), Tinian, Guam, Yap, Truk, Peleliu and other places. Their duties were anti-submarine patrol, reconnaissance, ship escort, night attacks and more. The unit headquarters were destroyed on Tinian and on July 10 it was disbanded.
Posted by Arawasi